The Hamilton County Leadership Academy had its own 30-for-30 spin.

HCLA recognized 30 of its most accomplished alumni in honor of the organization’s 30th anniversary. The HCLA Impact Awards were presented during the eighth annual Leadership Summit June 15 at the Embassy Suites in Noblesville. 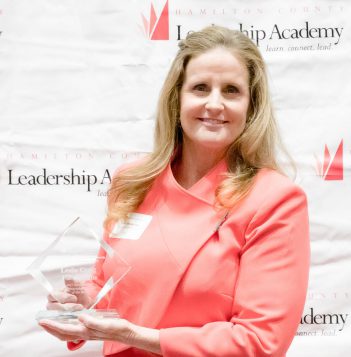 “These distinguished leaders are making an incredible impact on where we live, work and play,” HCLA Executive Director Andrea Marley stated. “For our 30th anniversary, it is an honor to highlight and celebrate the service of these award winners — a challenging list to compose due to the extraordinary alumni in which HCLA proudly invests.”

HCLA gave the award to 30 alumni who have distinguished themselves in Hamilton County through the following criteria: Made an outstanding impact on a community through contributions to a nonprofit organization; extensive community engagement portfolio; substantive participation and leadership on community committees, work; evidence of engaging and impact on others in the volunteer effort; leadership in areas of professional or community development; and leadership in addressing issues, influencing change, or pursuing new ideas from the perspective of education, public policy or philanthropy.

In addition, Leslie Henderzahs, a member of its Class of 1995 and a partner at Church Church Hittle + Antrim, was awarded the HCLA’s 2021 Distinguished Alumni Award. The Noblesville resident recently completed a term as president of the Indiana State Bar Association and has served the community through positions on local nonprofit boards.

“The HCLA has fostered a great many leaders, now approaching 800, who collectively make Hamilton County a model community,” Henderzahs said. “Here, we are fortunate to raise our families, stimulate culture and education, and most importantly, come together and call it home. Each and every graduate of the HCLA has contributed significantly to the enrichment of Hamilton County.  I am honored to be among this group of fine people who strive for excellence and achievement each day. I am so appreciative of those before us who blazed the trail.’’

Hamilton County Commissioner Mark Heirbrandt, a Westfield resident, was recognized as an honorary alumnus of the organization for his continued participation on leadership panels and consistent support and stewardship of the Hamilton County Leadership Academy.

“I was honestly surprised and taken back when I found out that I was receiving this award,” Heirbrandt said. “Commissioner Christine Altman got me involved with HCLA immediately after being elected into office in 2013.  Each year, the leadership of HCLA has asked me to present a seminar about County Government 101. Over the years, I have seen many HCLA participants become leaders in our community. It is truly gratifying, and I am honored to be recognized by this great organization.”