The timing was right for Tracy Rogers to hang up his umpire mask and basketball whistle and concentrate on his grandfather duties. 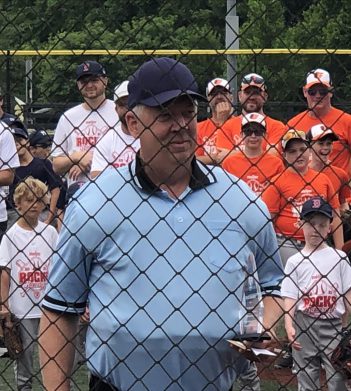 “My oldest granddaughter is 4 and started playing tee-ball and basketball, and (I have) a new (set) of priorities as a grandpa,” Rogers said. “When she visits (from Jeffersonville), I want to be doing what she wants to do and not out at Grand Park. I miss it, but I won’t miss the conflict if I’m missing something with my granddaughter.”

Rogers spent 25 years as a licensed umpire for Westfield Youth Sports Inc. He umpired his final game, the fifth- and sixth-grade baseball championship, June 24 at Grand Park. He was presented with a commemorative plaque for his service.

He served as a basketball referee for WYSI for the past 18 years.

“I might fill in a little bit but I don’t plan to be a regular,” he said.

Rogers, 60, and his wife, Chris, moved from Westfield to Noblesville in October 2020.

Rogers’ sons, Jonathan and Brent, both played baseball and basketball in WYSI. Jonathan, who lives in Greenwood, graduated from Westfield High School in 2009 and Brent, who lives in Jeffersonville, is a 2011 WHS graduate. Both sons are teachers.

“I did some coaching with them, but umpired as well,” Rogers said.

For Rogers, it was a good experience working with recreational league players.

“It’s different with rec league because behind the plate, I can still coach a little bit,” said Rogers, a sales representative for an animal health company. “I can give hand signals to the pitcher, why I didn’t call a strike, bring it up or bring it in. Parents would see I was trying to help the weaker players, ‘Step out, take a practice swing. You can do better than that, show me another. Step in and hit now.’ If parents were paying attention, they could tell I was trying to help kids while officiating.”

Rogers said he jokingly said to families there are three kinds of calls an official makes.

“There’s good, there’s bad and there’s missed and I probably cover them all,” he said.  “It puts perspective on things.”

While the Indiana High School Athletic Association and other youth sports organizations have had trouble getting officials, Rogers said there is a lot of tenure among those in WYSI.

“Both of my sons officiated for WYSI until careers have taken them elsewhere,” he said. “It’s a great moonlighting job.”

Rogers said he was always content to officiate at the recreation league level so he could help coach kids.

“It’s important for the coaches and parents to let the officials develop as well,” Rogers said.