You are at:Home»Current in Noblesville»Noblesville Community»Noblesville mayor previews several new projects at annual State of the City address

Noblesville Mayor Chris Jensen was quick to tell the State of the City audience that if they wanted the city to play it safe, they hired the wrong man for the job.

Jensen made the comment prior to detailing many wins for the city in 2020 and 2021, as well as detailing several developments to come at the Sept. 21 event at the Embassy Suites in Noblesville. The presentation focused on Jensen’s four key pillars: infrastructure investment, economic development and workforce, public safety investments and protecting and enhancing the city’s downtown.

Pleasant Street is at the top of Jensen’s priorities. Jensen showed an animated fly-over video that shows viewers what the completed Pleasant Street corridor would look like.

Jensen said the city plans to break ground on the construction of a new east-west corridor utilizing Pleasant Street by the end of 2022.

“We will absolutely transform the way people get around Hamilton County, Indiana, and how people visit our community,” Jensen said.

Other infrastructure projects to come next year include two roundabouts on Ind. 32 – one at the Ind. 32/Ind. 38 intersection and one at Ind. 32 and River Road.

Jensen said even during the COVID-19 pandemic, the City of Noblesville was able to help create an environment that led to 96 new jobs in the city and $150 million of public-private investment. In 2021, so far 351 new jobs have been committed and more than $333 million dollars have been invested into the community through private sector investment.

A rendering for the Milhaus development, which is a proposed $118 million mixed-use development at the northwest corner of 146th Street and River Road. (Renderings courtesy of the City of Noblesville)

Jensen detailed several new developments, including Milhaus, a $118 million dollar mixed-use development consisting of retail and residential at the northwest corner of 146th street and River Road, as well as Innovation Mile, a master-planned innovative district focused on commerce, community and culture along 141st Street from Olio Road to Prairie Baptist Road. Innovation Mile is expected to bring more than 200 acres of a campus-like setting designed for high-tech companies in the medical technology or scientific industries. 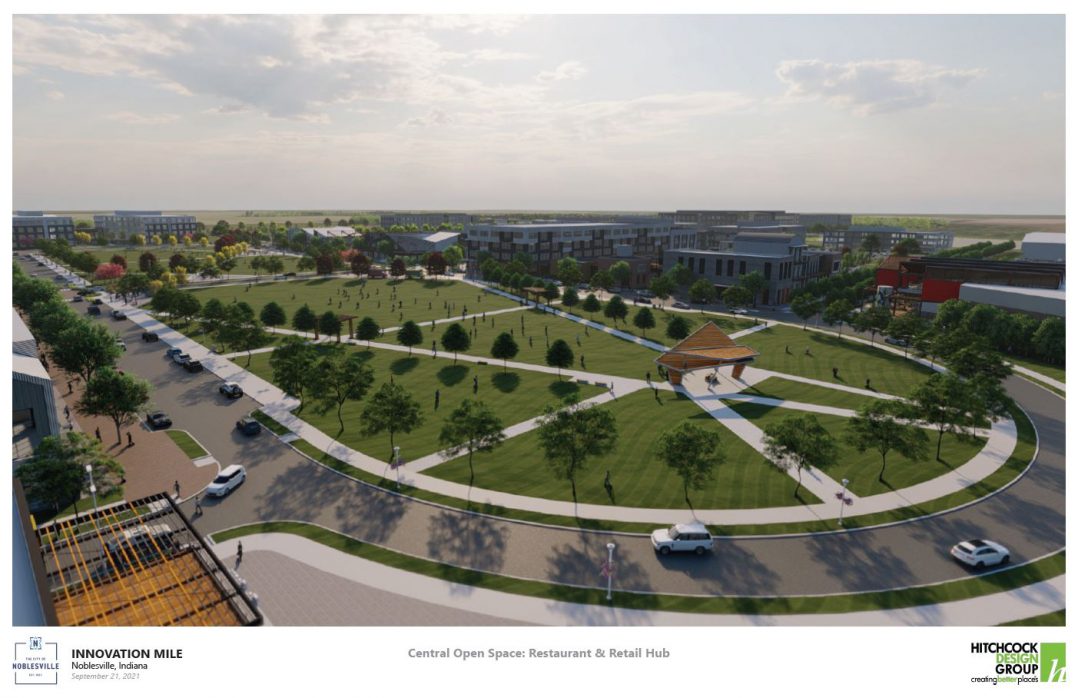 A rendering for Innovation Mile, which is proposed to be built along 141st Street between Olio Road and Prairie Baptist Road.

Jensen said that nearly 50 percent of the annual city budget is focused on public safety. During the State of the City, he detailed several programs the city has enacted to enhance its public safety offerings, such as NobleAct, a proactive paramedicine program to help individuals with mental health or substance abuse issues access the resources they need; the Mobile Integrated Health Care System, in which community resource paramedics work with the city’s senior population to help prevent 911 calls in regard to trips, slips and falls; a police de-escalation simulator training room to allow police officers to train in real-time scenarios; and the Noblesville Wellbeing Coalition, which will receive the results of a survey it issued this summer. More than 2,700 people took the survey, which had a goal to judge the city’s overall wellness.

Jensen said more than $145 million of public-private investment was invested in 2020 in the downtown area, with more than 800 new apartment units and 1,200 new residents coming to those units in the next 18 months. The Levinson is expected to open soon and will consist of 85 apartment units and 299 parking spaces, 199 of which are designated for public use. Jensen said the Levinson’s parking garage is expected to open on or before Oct. 1.

Share. Twitter Facebook Pinterest LinkedIn Tumblr Email
Previous ArticleUptown Cafe to open in Carmel space that housed The Egg and I
Next Article Athlete of the Week: University High School’s top golfer Becky Williams is a natural athlete
Follow us on Social Media