You are at:Home»Current in Zionsville»Zionsville Community»Athlete of the Week: University High School’s top golfer Becky Williams is a natural athlete 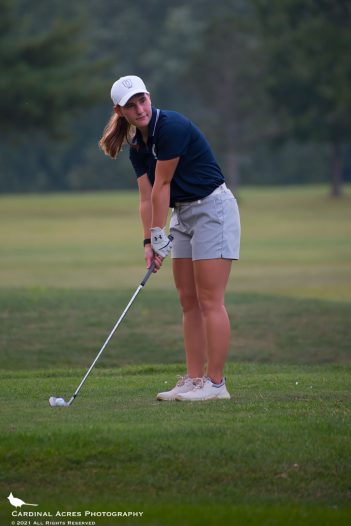 Becky Williams has always been a girl for all seasons.

“Becky has played multiple sports growing up and invariably does well at all of them,” said her father, Bruce Williams. “She is naturally athletic.”

Williams is the No. 1 golfer for the University High School girls team and also plays basketball and throws the shot put and discus on the girls track and field team.

“She was already a very strong golfer when she joined our team and has improved tremendously over the past four years,” Trailblazers coach Taylor Newell said. “Becky is one of the kindest, most generous students I have ever known, but is also fiercely competitive. She works extremely hard year-round on her golf game and strives to play her very best golf every time she is on the course, whether she is playing in a tournament or just practicing.”

Newell said Williams is just as committed to helping her teammates.

“Over the years, she has helped instill a very positive and supportive atmosphere on our team,” Newell said. “She regularly goes out of her way to encourage her teammates and is always willing to give tips to her fellow golfers without ever being overbearing.

“She epitomizes leadership by example, and as a coach, I truly could not ask for a better senior captain.”

Williams said this has been her best golf season so far.

“I’ve focused a lot on my short game and putting this past year, but I think I’ve just become a better all-around player,” she said. “A lot of it has been mindset. Earlier in my high school career, I was an all-or-nothing-type player. I’ve learned to play more conservatively, which I think has benefited my play.”

Williams made it to the state finals as a freshman and is seeking a return in October. She recently had a season-best 5-under 30 for nine holes in a match at Wood Wind Golf Club in Westfield.

In addition, Williams is a top student with a 4.24 cumulative GPA. She also has played the bass in orchestra since middle school and all four years in high school.

The 5-foot-4 Williams played basketball in seventh grade at Park Tudor and decided to continue that as a junior at University.

“One of my golf teammates is a basketball player and she convinced me to play because they were light on players,” Williams said. “I was going to do track my sophomore year, but it got canceled due to COVID-19. I like sports, so I wanted to keep going with that.”