Noblesville resident Michael Morgan, 51, was arrested Sept. 25 on charges of arson, burglary, theft, criminal mischief and operating a vehicle while intoxicated. The arrest occurred after Hamilton County Sheriff’s Office deputies were called to the 18100 block of Durbin Road at 10:26 p.m. Sept. 24 for a residential fire. 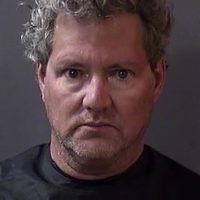 According to a press release from the HCSO, the investigation was indicative of arson and burglary, although the fire is still under investigation. Surveillance video and community assistance provided more information about the suspect and vehicle.

HCSO deputies and detectives identified Morgan as the suspect. He had outstanding warrants for arson and burglary associated with a separate case. Morgan is from Phoenix, Ariz.

As of press time, Morgan was being held at the Hamilton County Jail on a $150,000 bond.