You are at:Home»Current in Fishers»Fishers Community»George to resign from Fishers City Council

Fishers City Council District 5 representative David George announced his resignation from the council in a letter dated Sept. 26. The resignation is effective Oct. 27.

George said he is resigning because of an increased workload in his day job. He is the vice president of development at CRG Residential, a Carmel-based construction, redevelopment and renovation company for multi-family properties. He also said there was an increased number of hours needed for constituent services for residents in his district. 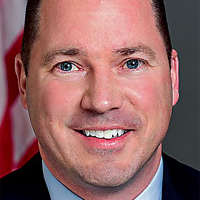 “I have been contemplating this decision for most of this year, but waited until now so that as a member of the finance committee I could assist with the 2022 budget,” George stated in his letter. “I have served on first the Town, now City Council for 19 years. Over those years, I am

proud that we have worked to take the community from a AA to a AAA bond rating. I also

worked extensively on the Nickel Plate amphitheater and our road network.”

By serving through much of October, George can attend the Oct. 11 city council meeting to vote on the city’s proposed 2022 budget. The date also allows the Hamilton County Republican Party to hold a caucus later this month without the seat being vacated.