You are at:Home»Current in Westfield»Westfield Community»Mother remembers son Dominic Strain for his smile and determination

Mary Strain remembers her 18-year-old son as someone who lit up the room with his smile. Dominic Strain was killed Sept. 28 after being shot by his stepfather, Garrick Baker Sr. A press release from the Westfield Police Dept. said Baker was intoxicated and shot Dominic Strain after a negligent discharge of the weapon.

Mary described her son as someone who loved music and WWE wrestling.

“He loved watching WWE wrestling, and his favorite was John Cena. He loved playing Xbox with his friends and 3 of his brothers. His conversation during these games was quite amusing to hear. He loved … playing his guitar as well,” Mary said. “(Dominic) endured many medical obstacles as a young child, which included 4 brain tumor surgeries.” 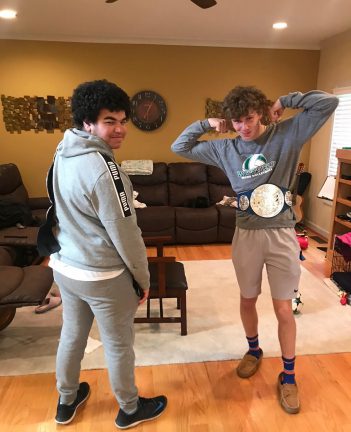 Dominic was a member of Westfield High School’s Best Buddies program, which is a chapter of Best Buddies International. Best Buddies International is a “nonprofit organization dedicated to establishing a global volunteer movement that create opportunities for one-to-one friendships, integrated employment, leadership development and inclusive living for individuals with intellectual and developmental disabilities,” according to its website. Dominic’s Best Buddy, WHS senior Joe Barbera, described Dominic as sweet and kind. Barbera was friends with Dominic since eighth grade.

“He was very sweet, vert kind and always included others. He liked to run and workout with me and he loved WWE and guitar. He loved dogs,” Barbera said. “I loved him very much and will miss him forever.”

Mary said her son’s love for music led him to want to start a band called Dominic and Friends.

“He definitely was a determined one and always pushed himself to do better,” Mary said. “Dominic loved going to Westfield High School. He loved being in Best Buddies and doing fun activities like homecoming with his friends.”

“I can truly say his life has touched more than I realized,” Mary said.

A GoFundMe memorial fund was established to help the family with funeral expenses. As of press time, it has raised more than $20,000. To donate, visit gofundme.com/f/e7sc3-memorial-fund-for-dominic.