You are at:Home»Current in Zionsville»Zionsville Cover Stories»‘I choose joy’: A Zionsville woman’s battle with breast cancer

During a routine mammogram in November 2013, Susie Jordan received news that would change her life. She had a lump in her breast.

Later, doctors would confirm she had breast cancer. And though she beat the disease, it returned in 2020, during the height of the COVID-19 pandemic.

While Christmas shopping with one of her two sons in December 2013, Jordan, 58, of Zionsville was told tests and scans confirmed she had breast cancer. Doctors had found two tumors: one in each of her breasts. One larger, the other more aggressive. Previously, her sister, Linda Dietz, had been diagnosed with breast cancer, but Jordan’s family did not have a history of the disease otherwise. She was shocked.

The first to know were her husband, Rob, and two sons, Matthew and Josh, but Jordan waited until after the holidays to tell the rest of her family and friends. She didn’t want anyone spending their Christmas worrying about her. Quickly, she had to decide about treatment, and in February 2014, when she was able to schedule a surgery date, she opted for a bilateral mastectomy — removing both of her breasts — and implants.

“My sister had the same thing, but I felt a lot of pressure on whether I should do what she did,” Jordan said. “It took some time and prayer to decide whether I should do it or not. For a woman, that’s a really hard decision. So I decided to go through with it because we thought that was the best chance of survival that I would have.”

During the surgery, a sentinel node biopsy was conducted to test her lymph nodes for cancer spread. Surgeons were unable to find any signs of cancer in her lymph nodes. Hoping the worst was behind her, Jordan received a cancer-free diagnosis after chemotherapy and hormone therapy. But in the summer of 2020, during a routine blood test, Jordan’s oncologist noticed several cancer markers were elevated and urged further testing, which revealed her breast cancer had returned, this time in her lymph nodes.

“There can still be stray cancer cells in your body, and if they clump together and grow, then it becomes breast cancer again,” Jordan said. “It just took six years for it to show up again.”

Jordan had Stage 4 metastatic breast cancer, meaning the disease was spreading. While she was thankful to catch the disease and have a chance to treat it, Jordan was “devastated,” saying it was “awful to hear the words Stage 4.”

Jordan said she was able to overcome the disease once again thanks to the support of her friends and family. Ruth Batson of Zionsville, a friend of Jordan’s, said Jordan “has been very positive and tried to keep a positive attitude” throughout her journey.

“I read something that said, ‘I’m not dying from cancer; I’m living with cancer,’” Jordan said. “And I really had that attitude that I want to fulfill who I am called to be in this world, and I am not going to let a diagnosis stop me from being who I am supposed to be and stop me from doing the things I should be doing.” 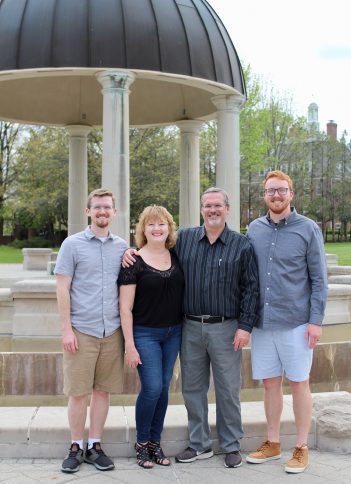 Susie Jordan of Zionsville, who works as a client account supervisor at Ren PSG, was selected as a model for the 2021 Pink Ribbon Connection Stars of Pink Fashion Show.

The professionally produced show featured fashions from the boutique The Secret Ingredient, and all proceeds from the event also directly benefited local breast cancer survivors and their families through Pink Ribbon Connection, a nonprofit that offers free services, resources and information, such as peer counseling, education sessions, free bras, wigs, prostheses and hats.

Jordan had attended the show in previous years with her sister, Linda Dietz, and said ahead of the event that she was excited to be a model.

“I think it’s great that it connects people to the mission of the organization and shows how their services might help other breast cancer survivors,” Jordan said. “It’s an uplifting event filled with hope and fun and joy. Joy is my theme, and I choose joy. That’s a song, and I do choose joy. I’m not going to feel sorry for myself.”