The Grand Park campus is about more than just games played on the 26 baseball and softball diamonds, 31 multi-purpose fields and three indoor facilities.

Grand Park Director William Knox said the Research & Development HUB is about extending the campus reach to the business of sports.

“The Research & Development HUB was created to harness all the opportunities we have on the Grand Park campus to further develop technology and service-related projects that serve our industry,” said Knox, who announced the HUB launch during the summer.

Knox said the goal is to use the campus’ 400 acres to advance every aspect of sports. With the continued growth of youth sports, Knox said there is opportunity to innovate in the areas of safety, technology, marketing and nutrition.

“We can play a part in making it safer and more accessible,” Knox said.

Knox said the mission is to work with companies throughout the United States that have technology-related projects that serve the industry.

For instance, Knox said Grand Park is working with Aware Sports, which has developed a streaming technology. Parents can watch the game on a livestream and after the game they can go on their website and capture the plays their child made during the game.

“They have what they call a snipping feature, where the technology and the (artificial intelligence) they have within their software tracks the ball and the player and can associate that player with all of the top plays,” Knox said. “That company is located out east but they will deploy and continue to refine their technology here in Westfield.”

Aware Sports can also measure speed and trajectory of the ball and speed of the athlete.

“A lot of the metrics that coaches look for when they are doing (scouting) will be able to be captured digitally,” Knox said.

Knox said Aware Sports install the system and have an employee on site probably once a month to maintain it. Knox said many of these technologies can be remotely managed.

There is a small office complex at Grand Park designed for companies that want to have an on-site presence.

“Part of our long-term strategy as we work with these companies and they begin to grow their businesses, they will look to locate in Westfield,” Knox said.

Knox said Grand Park has worked with several companies on development of autonomous equipment, such as mowers, that could support the grounds team. Reducing those costs would benefit the campus, Knox said.

Grand Park is working with companies that have developed nutrition apps, such as ZoneIn.

“We have access to the clientele they desire, and as they go through their due diligence or proof of concept, they can use our clientele to help flush that out,” he said. “We have half a dozen other places we are vetting.”

Knox said there has to be a benefit to Grand Park for any of the companies with which they plan to partner.

“We need them to help us grow and develop,” he said.

Some of the other partners are Spotz, RefReps and ZoneIn. Each company is housed or has deployed its products on campus.

“We knew creating the park was just the first piece of the puzzle,” Knox said. “The campus helps create that ecosystem that attracts these other businesses. What we’re looking to now are the areas around the 400 acres and how we can continue to support the success of the campus.”

“William Knox did an excellent job figuring out how to respond to COVID but to get us opened back up,” Cook said. “William served on some national committees with sports groups across the country on how to do this. Out of that, we learned the high demand that both youth and parents had for youth sports. At the same time, it flowed over to the business world. If we look at the hospitality industry, we learned Grand Park is relatively recession-proof because the moment we opened the doors, it was more like a floodgate.” 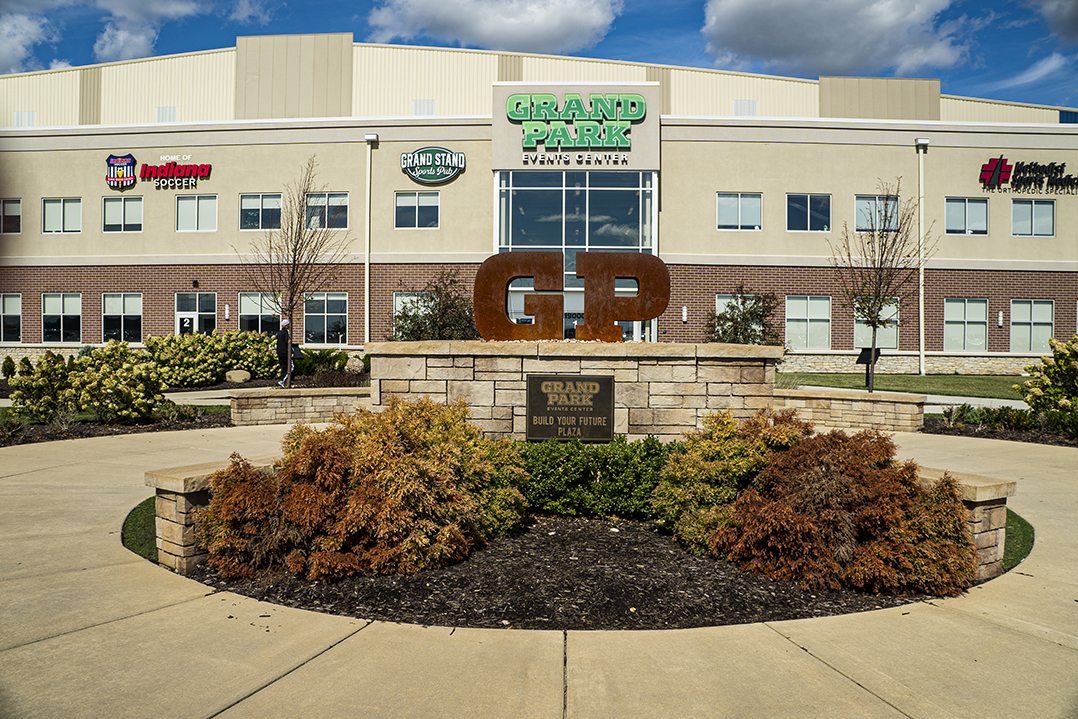 The other mission of the Research & Development HUB is to be used as a center for institutional research. The IUPUI Sports Innovation Institute is the first partner university working with the HUB.

“Because of the transition with COVID, we had the opportunity to work with IUPUI and the Sports Innovation Institute on a research project, which was one of the first items we ran through our Research and Development HUB,” Grand Park Director William Knox said. “We’ve also spoken with Butler and other institutions in the area and are trying to identify how their sports tourism programs can use the campus as that laboratory.”

IUPUI Sports Innovation Institute Director David Pierce stated the “goal is to set the industry standard for how universities partner with sports businesses to benefit students, communities and participants.”

Knox said the HUB has begun to develop educational and internship opportunities at the high school, college and postgraduate levels.

Knox said 11 high school interns are in a program now.

“The interns are coming to campus three days a week and we cycle them through this curriculum, so they can learn what it takes to manage a campus like Grand Park,” Knox said. “We are teaching them the lower-level operational aspect of what we do on campus. We also have several college-level interns and then even more graduate-level students who use Grand Park to produce their capstone project or thesis project.”