You are at:Home»Current in Fishers»Fishers Cover Stories»Right on track: Visually impaired HSE grad continues to add to his sprinting success story

The 2021 Paralympic Games in Tokyo ended little more than a month ago.

But Noah Malone is already certain he wants to compete at the 2024 Paralympics in Paris. The Paralympics are held every four years, shortly after the Olympics in the same city. The 2020 Olympics were postponed a year because of the COVID-19 pandemic.

Malone, who is visually impaired, earned silver medals in the 100 and 400 meters for the U.S. in the Paralympics in the T12 division for visually impaired runners in late August and early September. The 2020 Hamilton Southeastern High School graduate and Indiana State University sophomore also was part of the U.S. gold medal–winning 400 universal relay team, which included runners with other types of disabilities.

The pandemic placed limits on what the athletes could do in Tokyo.

“It was definitely difficult, but I do feel the experience was great,” Malone said. “There were no fans and we couldn’t sightsee around the city, but in terms of the hospitality, all the things we got to do in the Olympic Village and the track (competition) itself, it was still amazing.”

There was no 200-meter race in the Paralympics this year. So, Malone bumped up to competing in the 400, an event he’d never run before.

“He surprised me with what he ran at U.S. Paralympic Trials to get on the team in the 400 and surprised with the ease that he ran in the prelims at the 400 and backed it up in the finals,” Indiana State assistant track coach Anthony Bertoli said.

Bertoli, who serves as the sprints coach, said Malone is very humble.

“He’s an amazing athlete and even better person,” Bertoli said. “He’s going to do some pretty amazing things when it’s all said and done. He’s going to do his part to advance Paralympic Track and Field by pushing his competitors.”

Malone, who is legally blind, said his eyesight was normal until he was 13. Then the first day of school in eighth grade, he couldn’t see the board. His father took him to the doctor and it was discovered Malone had Leber’s hereditary optic neuropathy, a severe mitochondrial optic disease that causes central vision loss in both eyes.

According to Indiana State, Malone is the only visually impaired athlete on scholarship in Division I sports.

Bertoli saw how driven Malone was as he prepared for Paralympics.

“Noah had to spend most of the summer here on campus training by himself, and that’s not an easy thing to do with some of the longer workouts,” Bertoli said. “He had to find the inner drive and determination. He always gave me full effort every day and was smart with his body.”

“He definitely came in and played a big role in the team’s success and set a tone for the sprint squad,” Bertoli said.

Bertoli said Malone had some obstacles to overcome, mostly with logistics in indoor meets.

“He can’t see far enough down the track to know that he’s got a clear track and he’s not going to run anyone over,” Bertoli said. “His teammates played a big part in helping him because I wasn’t able to be on his hip the entire time. He’s just one of the guys.”

Bertoli said Malone is able to see the lane lines.

“But in the 200 indoors, he couldn’t see the curve coming about halfway through the race,” Bertoli said. “By that time in the race, you are moving pretty fast. We’ve got a couple more things to figure out on how we address that (during the indoor season). There were a couple times this year in my head I put some limitations on him and he kept proving me wrong over and over.”

Other than a little help indoors, Malone said his training is the same as every other member of the team.

Malone said his experience at Indiana State prepared him well for Tokyo.

“Everybody is so supportive,” Malone said. 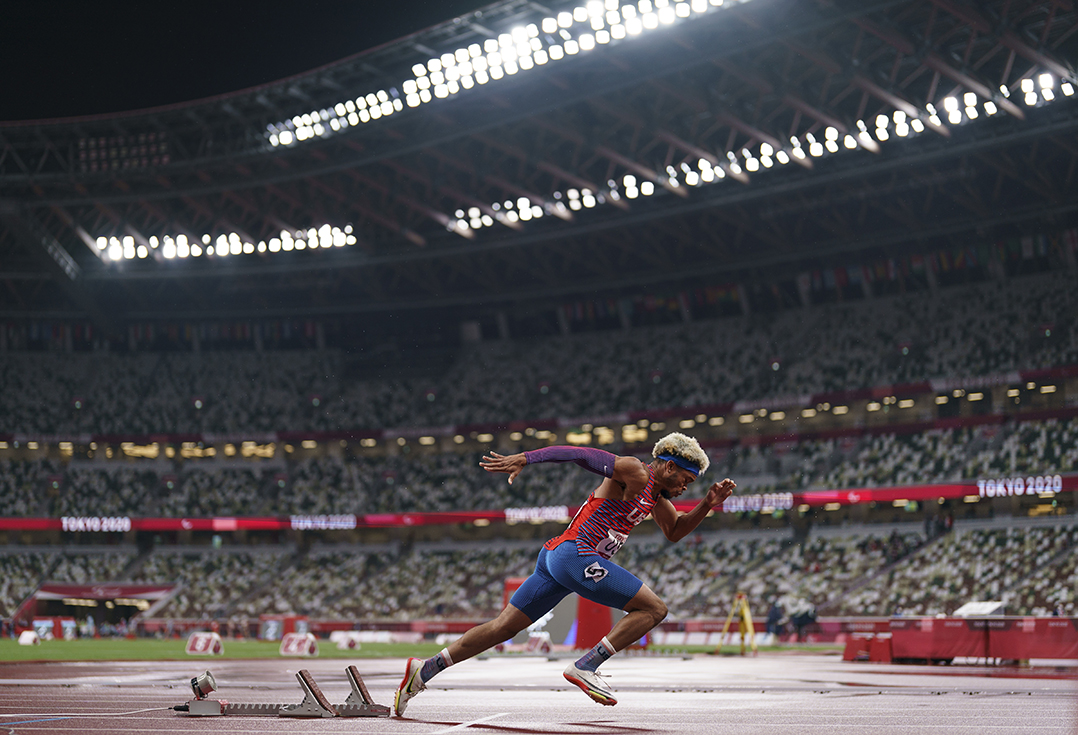 Noah Malone is off at the start of the 400 universal relay final at the Tokyo Paralympics. (Photo courtesy of Olympic Information Services)

Personal: An Indiana State communications major, Malone recently released a self-published memoir called. “Losing Vision, Not Dreams: Reflections on My Teenage Years.”  Malone said he wrote it to give others hope when facing challenges.

High School career: As a Hamilton Southeastern junior, Malone won the 200 meters with a personal record of 21.307 seconds and was second in the 100 meters in 10.73 seconds at the Indiana High School Athletic Association state meet in 2019 in Bloomington. The 2020 meet was canceled because of the pandemic. As a sophomore, Malone was fourth in both the 100 and 200 in the state meet.

What he does to relax: “I usually listen to music and enjoy my me time.”

Favorite vacation spot: Dubai in United Arab Emirates, where he competed in the World Para Athletics Championships. He also has competed in international competitions in Peru and Switzerland.