You are at:Home»Current in Carmel»Carmel Cover Stories»Crossing the finish line: Carmel man quits job to focus on helping others, including by running the Boston Marathon

This year’s Boston Marathon was more than simply a 26.2-mile race for Carmel resident J.R. Sandadi. Rather, the Oct. 11 event was an opportunity to run in memory of his parents, who both died in the last nine months.

Sandadi’s mother died in November 2020 from breast cancer, and his father died in August from brain cancer after being diagnosed in early June.

“To lose both parents in the span of nine months was a huge shock to my emotional system,” Sandadi said. “I was so blessed to spend so much valuable time with Mom and Dad when they were the most vulnerable and when they needed (me) the most. COVID-19 did not stop me from making trips to India.”

Sandadi was in India in July and August and had little time to train for the Boston Marathon. But he never considered not running the race – training hard for six weeks after returning from India Aug. 30.

“Losing both mom and dad has been a huge emotional blow and I wasn’t sure how I would react come (race day). After races I would call them and they would always say, ‘Man, you are crazy!’ And my mom would always ask, ‘Do you really get joy out of running?’” Sandadi said. “So, I was processing all of that and wishing they were there to share my experience and my joy, and I wanted to make sure I ran my hardest possible and completed it in their memory.”

Sandadi did complete the marathon – in 5 hours and 35 minutes. His wife, Madhuri, and children, Nitya and Shrithan, and extended family and friends were there to encourage him along the route.

“The best part of this whole weekend was having them there because even though I have been running eight years, they’ve not seen me finish a marathon because the races are usually out of town,” he said. “It made this a special place to have them there cheering me on as I got closer and closer to the finish line.”

Sandadi, 53, who quit his corporate job four years ago to focus on his volunteer efforts, reached his fundraising goal of $8,000 to benefit Project Hope Boston, an organization that works with women and families in the Dorchester and Roxbury neighborhoods of Boston to move out of poverty.

Sandadi received a guaranteed entry to compete in the Boston Marathon through John Hancock Financial, which annually recruits runners to participate in the race and fundraise for a nonprofit at the same time. Sandadi was one of 14 runners on Project Hope Boston’s team, which aimed to raise $150,000.

Last year, Sandadi raised more than $10,000 for Project Hope Boston, but he didn’t get to run when the race was canceled because of the COVID-19 pandemic.

“I was bummed when the race was canceled, but at least that money was put to good use in COVID times,” he said.

Project Hope Executive Director Christine Dixon said the organization is extremely grateful to Sandadi and the other runners who competed to benefit the nonprofit.

“Not only was this team training for a tough race, they raised over $160,000 for the women and families of Project Hope,” Dixon said. “Of course, all the funds raised allow us to partner with more families and support them on their journeys up and out of poverty, but there’s so much more than that. It’s about our community, near and far, showing up and reminding us that we don’t have to do this work alone, that together, we can move our mission forward.” 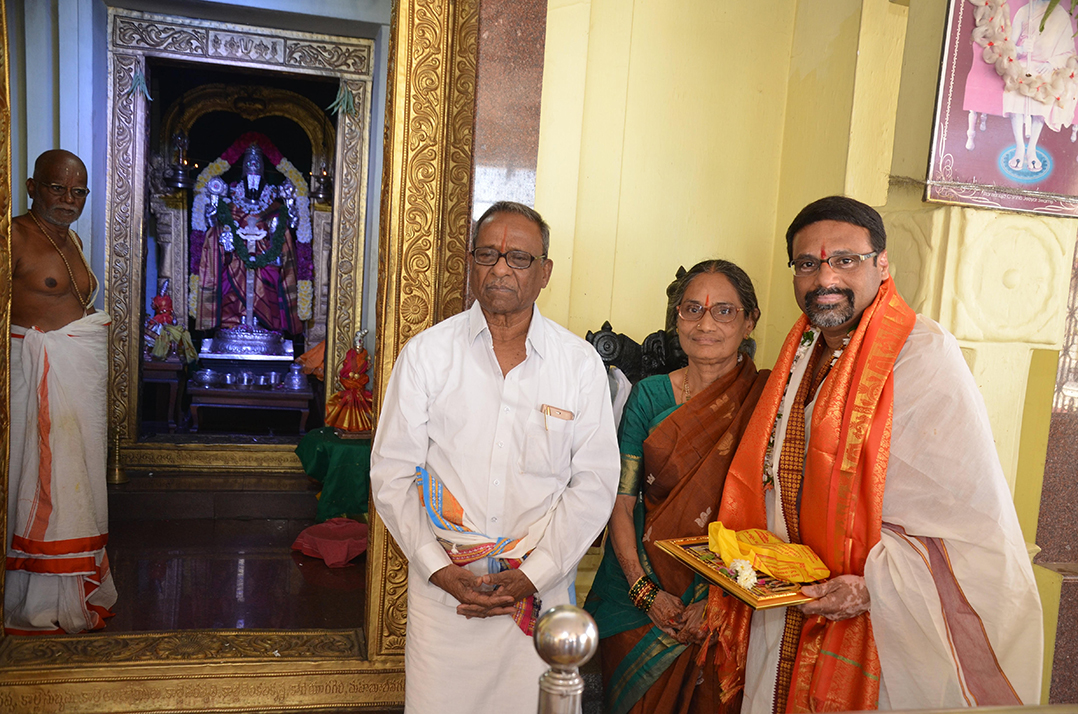 J.R. Sandadi’s father inspired his service to others. His father quit his civil servant job around the age of 50 and dedicated the next 31 years of his life to social causes in Hyderabad, India.

“He felt there were better things that could be done, and he wanted to give time to society,” Sandadi said. “We were not wealthy, but he did not go off the wealth-making side of the coin. That was one of my first inspirations. My wife and I always talked that at a certain point in my career, I did not want to work as a corporate slave anymore, and when I could, I would quit my job and give back.”

So, that’s what Sandadi did. After working with Unisys Corp. for 23 years (his last role was public sector program director for the northeast region), he left the company at the end of 2017.

“At present, I dedicate my time to various volunteering organizations locally as well as nationally,” he said.

Organizations Sandadi volunteers with include the Indianapolis chapter of Sewa International USA; Hindu Education Foundation; Center for Interfaith Cooperation; and School on Wheels.

“I could be in my own cocoon with my wife and kids and making money, and there is nothing wrong with that. I did that for 20 to 25 years but then thought this is no way to live a life,” he said. “It goes back to who I am basically as a practicing Hindu. You don’t give by putting yourself on a pedestal and saying, ‘I am this rich guy and want to give to you, poor man.’ When you are given an opportunity to serve, you give with humility.” 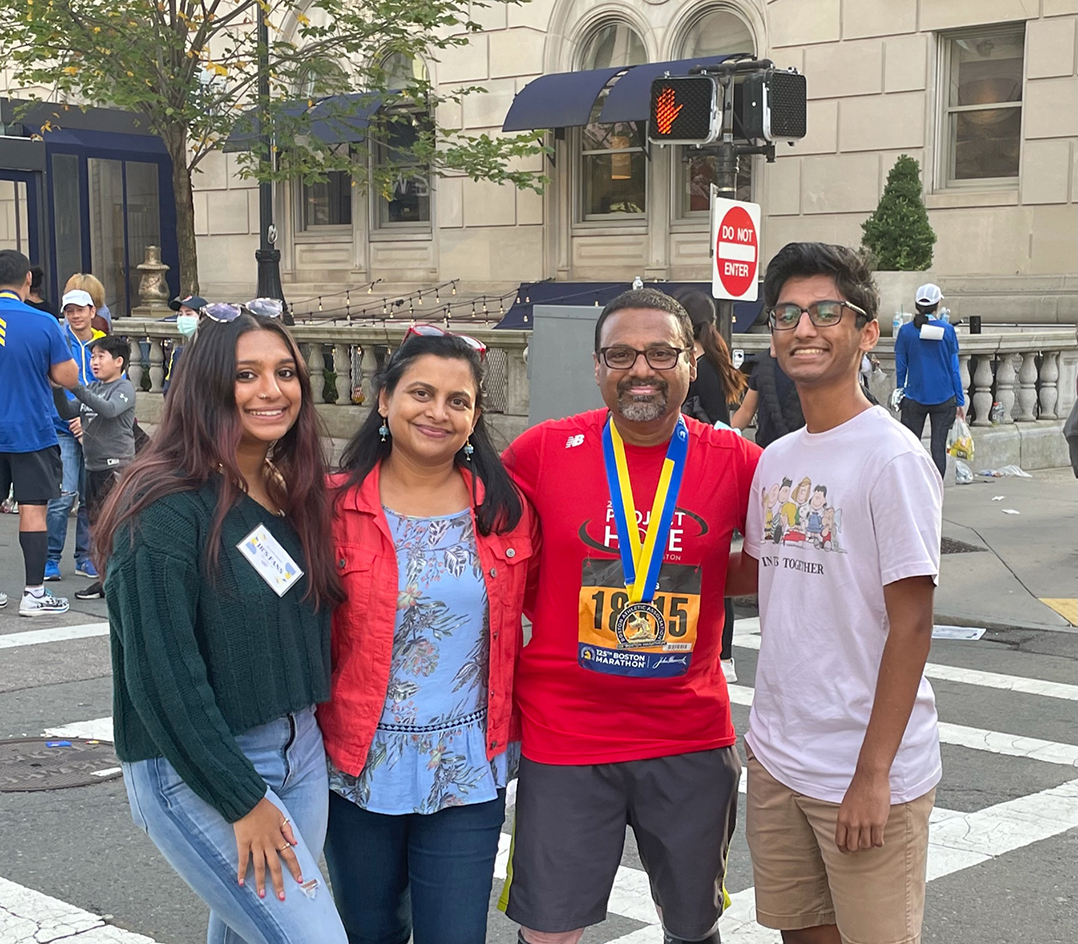 J.R. Sandadi, second from right, is joined by, from left, his daughter, Nitya Sandadi; wife, Madhuri Meda; and son, Shrithan Sandadi, at the Boston Marathon. (Photo courtesy of J.R. Sandadi)

‘Age is just a number’

J.R. Sandadi said it is never too late to start running.

“What helped me the most was finding a set of friends who can motivate each other to run. There are a bunch of running groups around Carmel,” he said. “The important step is making that first run. After that, it will be very addictive, and you do not want to quit, for sure. Finally, in running, the only opponent you have to beat is yourself.”