You are at:Home»Current in Westfield»Westfield Cover Stories»Finding his rhythm: Retired Westfield Middle School teacher turns to music for strength after Parkinson’s diagnosis

Retired Westfield Middle School teacher Joe Stemnock has played music since he was in his early teens, but a Parkinson’s disease diagnosis in October 2017 enhanced his desire to play.

“I think that kind of motivated me to go solo,” Stemnock said.

A multi-instrumentalist, Stemnock had played in bands for several years, playing mostly cover songs, but learning he had Parkinson’s encouraged him to write and record his own music while he still had the ability to do so. Playing music also has led to an improvement in Stemnock’s cognitive function, which can be affected by the disease.

“I have some memory issues, but it’s not anything profound,” Stemnock said. “Just recalling things takes me a little longer. Music as a therapy for Parkinson’s has really gained popularity. Not only does playing guitar keep your hands loose and flexible and strengthened, but when you play music, you are using multiple parts of your brain, and so there’s kind of a hypothesis that it stops or slows cognitive decline.

“I find when I play, I’m a little more alert, and it tends to help my cognitive state to some degree.”

Stemnock, 60, also said he experiences stiffness and soreness, and playing music is beginning to cause him more pain.

“I have to really stretch and make sure I take medications properly and I can usually play for a couple hours before I get fatigued and can’t play,” he said. “I actually treat it like a job because I’m retired, so it keeps me busy.”

Stemnock knew he had Parkinson’s before the official diagnosis.

“My right hand, whenever I would use my mouse at school, my pinky would twitch,” Stemnock said. “It got to the point where kids would look at my hand and say, ‘Mr. Stemnock, are you nervous?’”

After doing some research and seeing a neurologist, Stemnock’s intuition was verified.

“I didn’t tell anybody at school for quite some time,” said Stemnock, who taught seventh-grade arts. “I didn’t want it to affect my employment.”

However, the disease progressed to the point that it led Stemnock to retire in December 2018.

Stemnock and his wife, Kelly, recently moved to Westfield from Carmel. He has a music studio in the upstairs of his home. He records songs from all musical genres. They are available on YouTube and Spotify under his stage name “Stemmy.” He has produced more than 175 songs.

“I’ve always been a multi-instrumental player,” Stemnock said. “I actually started playing guitar and was interested in drums when I was younger. Right now, I basically do my music completely solo.”

When recording a song, Stemnock uses digital audio workshops and can play keyboards, and guitar. He plays everything except the drums in his songs. Drums are provided by a loop service.

He also provides the vocals.

“I do all the singing, which to be honest is getting a little more difficult because one of the common issues with Parkinson’s is issues with the voice,” Stemnock said.

Stemnock records, writes and plays songs between six and eight hours a day.

Stemnock and his wife have known each other since they were 18 years old, so listening to Stemnock play music is nothing new for Kelly. 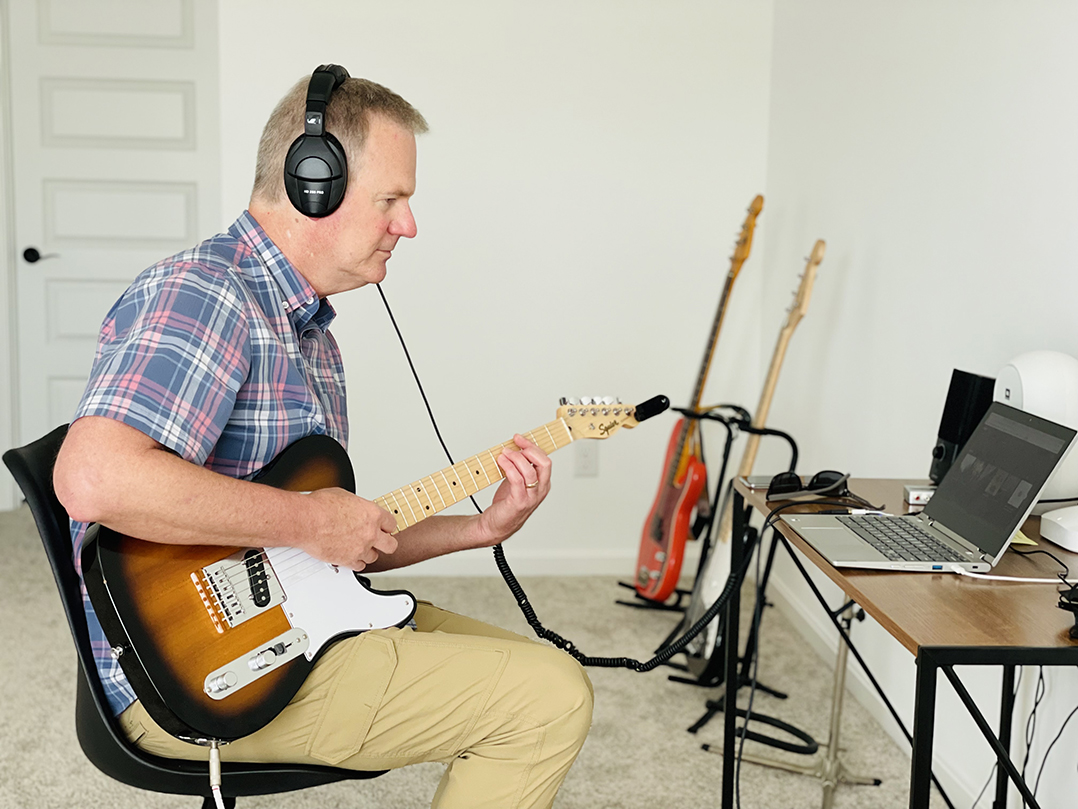 Joe Stemnock left the last band he played in because of artistic differences, but it also was important to him to show people he could still play and produce music, despite his Parkinson’s disease diagnosis.

“It provides a therapeutic release for me from the standpoint it involves me cognitively and keeps my mind intact,” Stemnock said. “It’s a positive thing for me to keep me cognitively sharp.”

“He saw life differently with Parkinson’s, ‘This is my one chance to do what I want to do now,’” Kelly said. “He was concerned what the future might bring him as the disease progressed, and he felt like this was his opportunity to say, ‘I’m going to do it my way.’ I’m really excited for him. He’s worked really hard at this. It means a lot to him, and it really fulfills him. He’s very creative. It fills that for him. It’s a great addition to his life.”