Grand Junction Plaza opened Dec. 17 after a 15-year journey from concept to reality.

The idea for the plaza, a 6-acre greenspace with an amphitheater, ice skating rink and café, was conceived in 2007 when Mayor Andy Cook wanted to create a downtown hub for the then-Town of Westfield. Westfield became a city in 2008.

“Grand Junction and what to do with our downtown was really the very first endeavor that my administration made beginning back in 2007,” Cook said.

Cook said the idea behind Grand Junction Plaza was formed long before Grand Park. The 2007 comprehensive land plan identified a need for what Cook calls a “destination downtown.” In 2008, the city established a volunteer-based Grand Junction Task Group and gave it the assignment of making Westfield’s downtown a destination.

The group went through three design firms during a six-year period before selecting a design. The next step was buying property in a 6-acre area with 28 parcels. The city also had to develop retention areas because of constant flooding.

“We developed retention areas to the southwest of the park and directed the dam underneath the Mill Street Bridge, and that will now ensure forever that we will have a babbling brook and not a flood,” Cook said.

Cook said the Grand Junction Task Group “very much” accomplished the goal it set out to achieve.

“They were asked to look at our natural and our man-made assets and how can we capitalize on them,” Cook said. “Naturally, we had the convergence of two steams. They had to be controlled, redone. Really, they had become a ditch, and we wanted to turn it into something aesthetic. We had a beautiful greenway along the creek.

“The man-made assets were the developing trail system. We will have six trails converge on this plaza.” 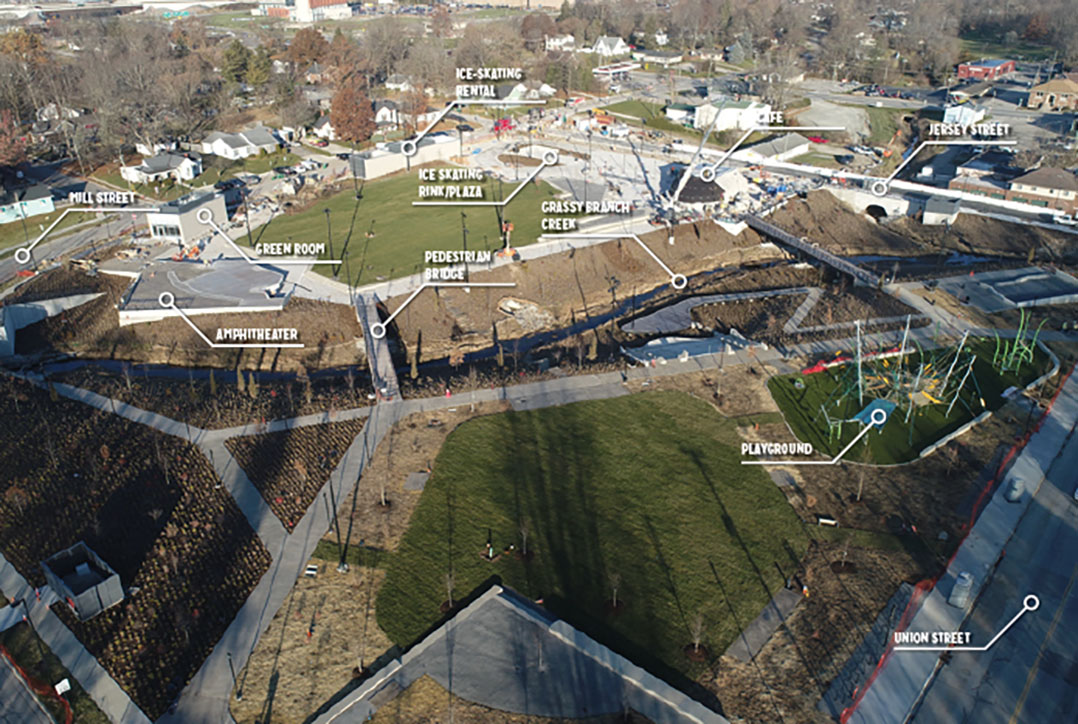 Grand Junction Plaza is missing two components that were proposed in the original plan: The amphitheater building on the stage at the southwest end of the park and the trailhead building at the southeast end of the park. The platform for the trailhead building and the amphitheater stage were constructed, but cost overruns put the plan over budget. The city then decided to pursue construction of those two buildings at a later date when funds are available, although a date hasn’t been determined.

“To construct something like this – obviously, this is not your typical downtown park – it’s very complicated,” Cook said. “Just the buildings themselves are not your typical cement block. They’re all using limestone. They’re very expensive. That’s part of the uniqueness of this. So, when it was bid out and estimates were made, by the time it got to construction, prices had escalated.”

Other hurdles to completing the park included utility work to existing water and sewer lines that were nearly 100 years old.

“There’s just a lot of uncertainties,” Cook said. “When the actual prices came in, we had a choice of either spending more money or saying, ‘Hey, we’ll do some of these things in the future.’ (Director of Public Works) Jeremy (Lollar) and his team looked at it and said, ‘Let’s work with what we have.’ They did a great job of reengineering some things.”

Reengineering temporarily eliminated the amphitheater and trailhead buildings and utilized new technologies to save nearly $3 million on the ice-skating rink.

Westfield City Council President Mike Johns said the finished product is beautiful but is disappointed that the council wasn’t notified to help with the reengineering.

“It was summer of 2020 and we heard that there was some reengineering going on with respect to Grand Junction,” Johns said. “The project went $13 million over the approved amount to build it, so the city administration took it upon themselves without telling the council to reengineer and remove the above-ground auditorium, trail building and to make some other modifications to the park. That was disappointing to the council and to me, personally, because if the council had known and participated in it, maybe we could save some of those structures and found money someplace else to put into it.

“There seems to be some type of a thought process floating around out there that somehow the council had a hand in reducing what the final product is. and that couldn’t be further from the truth.”

But Johns said he was happy and excited to attend the ribbon cutting in December.

“I really like the way it’s turned out,” he said. “I think it’s going to be a tremendous asset to Westfield. I’m glad we, as a city, did it. The next couple years will be very exciting for downtown Westfield. The growth is coming. We’ve been waiting for it, and citizens are going to start to see it happening.”

Visitors are allowed to visit the park, use the restrooms and play on the playground. The limestone-encased building on the northeast side of the park will contain a café in the future. Ice-skating rentals won’t be available until next winter. Public Works Director Jeremy Lollar said a café may open in the building in the first half of this year.

Final touches on the park will be complete in February. A formal ribbon-cutting celebration will be held in the spring, when the weather is warmer, and plants start to bloom. Future events will take place at Grand Junction Plaza, such as the Westfield Farmers Market. 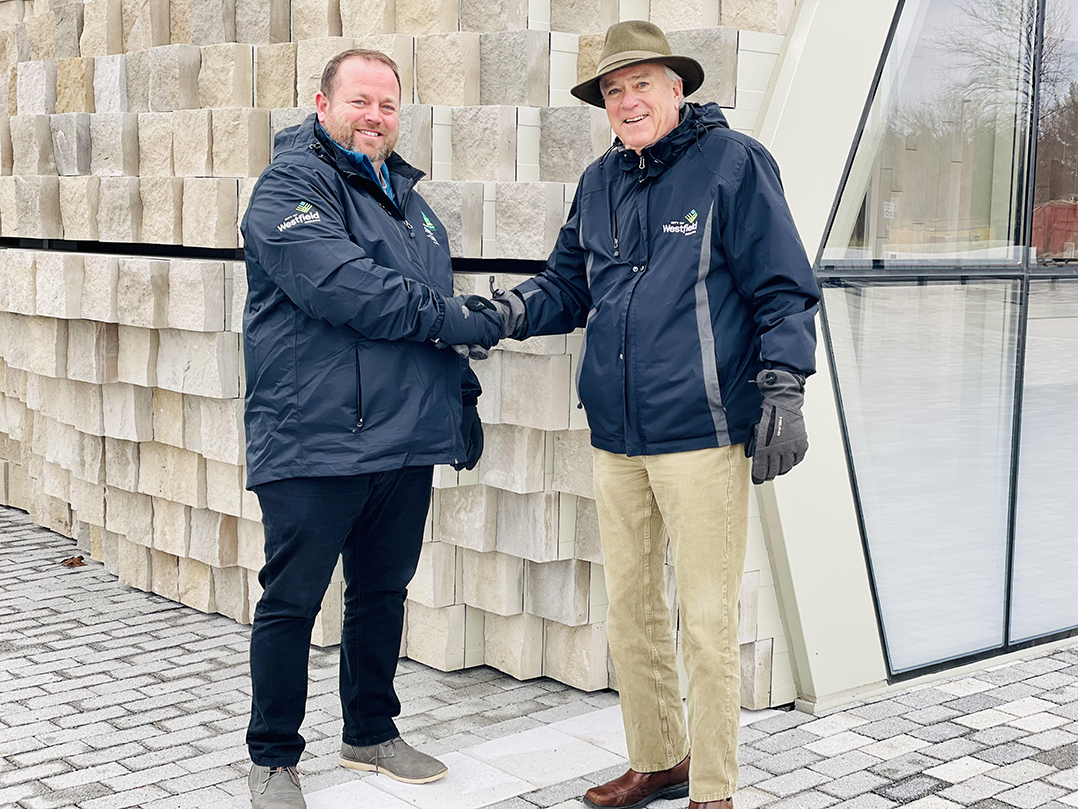 Mayor Andy Cook said Grand Junction Plaza was a catalyst for developing Westfield’s downtown even before the park opened. Developers heard about the park and decided to develop in the area before it opened.

“They created Park Street, which very pleasingly has become Westfield’s unique asset,” Cook of the “restaurant row” along Park Street in downtown Westfield. “It sets us apart from towns and cities and is a true destination (for) all of central Indiana because they love the unique charm of our Park Street merchants, our gift shops, our restaurants.

“The whole thing is creating a unique environment that complements our other towns and cities around us.”

Grand Junction by the numbers