A fan of the late Stephen Sondheim, Eleri Ward made acoustic folk arrangements of his songs.

“I made everything myself, so I recorded the guitar layers and added keyboard and vocals and recorded in my walk-in closet in Boston at the time. That’s what I was doing during the pandemic,” Ward said. “It became something so much more than I imagined. I never thought I would make an album of indie-folk Sondheim songs.”

Ward, who is based in New York, will perform songs from her album, “A Perfect Little Death,” at 7:30 p.m. Feb. 3 at Feinstein’s Cabaret at the Hotel Carmichael in Carmel. 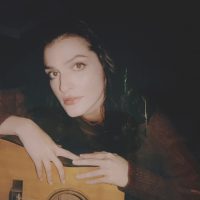 Less than a year ago, she posted some of her TikTok arrangements of Sondheim songs she had made during the past two years.

“People resonated with it and wanted me to release it,” Ward said. “I made the album.”

She asked the publication Broadway World if it could do an article.

“That day, I got an email from Ghostlight Records saying they were interested. (It read) ‘How can we help you?’” Ward said. “I released my album through Ghostlight, which I never thought would happen. I have a lot of passion for this project as I’ve always had passion for Sondheim and his work. Putting my own spin on it was something I never thought about. It’s very organic and natural.”

Ward said she looks forward to performing the music live.

“We all have, I think, collective experience with this music in very different ways,” Ward said. “This music is so universal and human that I think the meanings of the songs hit everyone a little differently. It hits me differently in different times of my life. To experience that in an intimate setting when it’s just me and the guitar, there’s something very personal about that.”

The album has 13 songs from different Sondheim shows. She said she chose her favorite songs. Besides the album, she said she will add new arrangements for the shows.

“I’ll be performing new arrangements of Sondheim songs that haven’t been released on streaming platforms yet,” she said.

Ward’s songs are on Spotify and Apple Music. For more, visit eleriward.com. For tickets, visit feinsteinshc.com.