You are at:Home»Current in Westfield»Westfield Cover Stories»Opportunities for all: Parents, city councilor advocate for advisory council on disabilities

As a parent of a child with special needs, Westfield resident Joanne Tedesco felt the city could provide more resources for families in similar situations. That’s why she reached out to Westfield City Council member Scott Willis, seeking his help in establishing an advisory council on disabilities for the City of Westfield.

She also sought the help of Tasha Cleaver, a Fishers resident who worked with Carter’s Play Place and saw the benefits of positive impact of the City of Fishers’ Advisory Council, which was established several years ago.

“I was working at Carter’s Play Place, which is a play place for all kids, and felt that Westfield could use some help with its growing population for an organization similar to the Fishers Advisory Council,” Cleaver said. “I was connected with (Fishers City Council member) Cecilia Coble, and she helped us connect with Scott.”

Willis is sponsoring an ordinance that would establish the advisory council. The Westfield City Council is expected to vote on the proposal at its March 14 meeting.

“I have a child with a disability but that pales in comparison with what many people in Westfield struggle with,” Willis said. “They brought to me what they thought the issues were, and I was overwhelmed with where to begin and how to get it off the ground. I walked away passionate about the cause.”
Willis said Fishers’ advisory council on disabilities is the blueprint for what Westfield’s could be.

“They’re light-years ahead of us,” he said. “This is kind of becoming a countywide initiative, and all the cities are lining up to get on board. We hope through partnerships it can become a county program with municipalities taking the ball and running with it.”

Willis said the advisory council is approved, it will immediately form a committee and shape its goals. It would consist of the city’s ADA coordinator, two community members appointed by the mayor, two community members appointed by the Westfield City Council, one Westfield City Council member, Westfield Washington Schools’ director of student services and a member of the city’s human resources department.

“We fully expect to crawl before we run,” Willis said. “We want to define our mission and how we function as a committee. We can’t do it all at once. Fishers has had their program for six or seven years. It has evolved into an amazing program. We aren’t ready for that yet. We have to at least put some shape to it.”

Willis wants to create a more accessible city. Although Westfield is ADA compliant, people with disabilities still face challenges, such as crossing Ind. 32 in a wheelchair.

“Some of the crosswalks aren’t appropriate,” Willis said. “There are many infrastructure projects the city deals with and we are ADA compliant, but being ADA complaint and understanding what that really means for people with disabilities are often times two different things.”

Willis wants the committee to be a voice to guide infrastructure and increase job opportunities for people with disabilities.

“Many people in the disability community are sitting on the sidelines because they can’t get into the workforce,” Willis said.

Lack of transportation and appropriate training are often job hurdles for people with disabilities.

For more on the ordinance, visit westfield.in.gov. 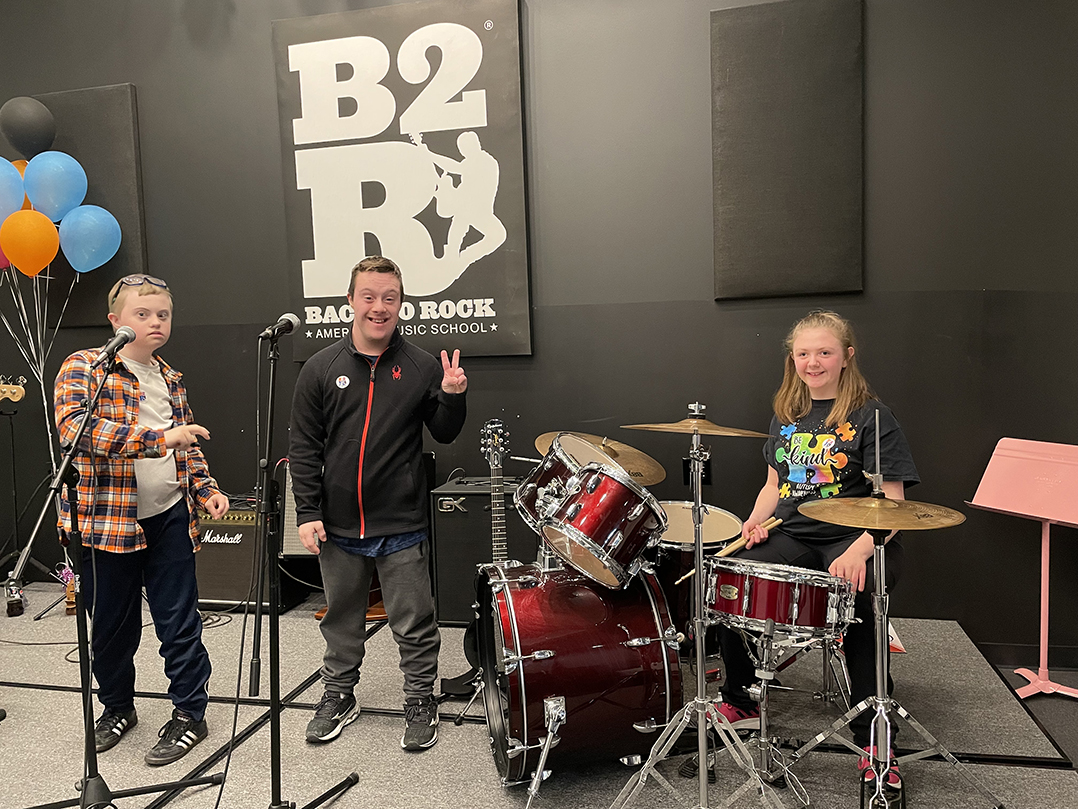 From left, Danny Degnan, Gabe Schepers and Madelyn Tedesco play in a band at Bach to Rock in Carmel. (Photo courtesy of Joanne Tedesco)

Fishers resident and Carter’s Play Place employee Tasha Cleaver has a child on the autism spectrum. She said it can be overwhelming without support.

“You have to have a place to turn to, not only for resources but to find connections,” Cleaver said.

Cleaver said if the Westfield City Council votes to establish an advisory council on disabilities, she is confident it will help combat feelings of isolation within the disability community.

Westfield resident Joanne Tedesco also is the parent of a child with a disability.

“A disability is not a cause and it’s not a charity, it’s a human condition,” Tedesco said. “It runs from birth to death. Anyone can become disabled as they mature. This (advisory council) could bring to light some really great opportunities and partnerships that can happen down the road.”