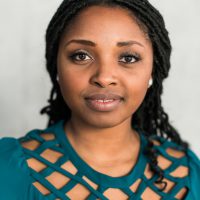 Nonetheless, she is challenging herself by playing Angela in “Honky Tonk Angels” in Beef & Boards’ production of the show from July 14 to Aug. 14. The plot centers on three gutsy women who follow their dreams to Nashville, Tenn.

“To do this show is to truly stretch my ability,” the Indianapolis resident said. “I have not been a true fan of country music but listening and learning these songs have opened my eyes to some new favorites.”

Another challenge has been portraying an outgoing and talkative character.

“Most of the roles I have played are a little more on the tame and quiet side, so being Angela has opened up a new side of me,” Ludlow said.

Ludlow is playing a character normally portrayed by a white actress.

“It’s always a wonderful feeling being representative and seen, especially in a show that highlights country music as it has historical ties to genres such as gospel,” Ludlow said. “It is also a genre that Black musicians are severely unrepresented or are present but have less of a voice.”

Ludlow was in Civic Theatre’s all-Black cast of “The Color Purple” in October 2021.

“I think it is a very positive step in the right direction, but I do believe there is still quite a way to go,” she said. “Civic did a great job of bringing an all-Black cast to a typically and traditionally white audience, but it took 30 years. Beef & Boards is also taking steps forward by placing many actors of color in roles that are usually cast as white. I think it is a matter of forming a bond with the communities that you are trying to reach and not only using them just for roles that are designated for actors of color but are good for them because they fit.

“It is going to take some time but there has been much progress.”

“This will be my third production with them, and I have met almost everyone from staff to many actors from all over the nation,” Ludlow said. “We still check in with each other and catch up on how life is going. I always feel welcomed whether it’s in the lobby to see a production or behind the scenes in the rehearsal space.”

Ludlow was in “Kinky Boots” earlier this year.

Ludlow began performing in high school. She did her first production her senior year at Edwardsville (Ill.) High School where she played Dorothy in “The Wiz.”