The Zionsville Middle School seventh-grader plays Ralphie in Civic Theatre’s production of “A Christmas Story, The Musical” Dec. 2-24 at The Tarkington at the Center for the Performing Arts in Carmel. 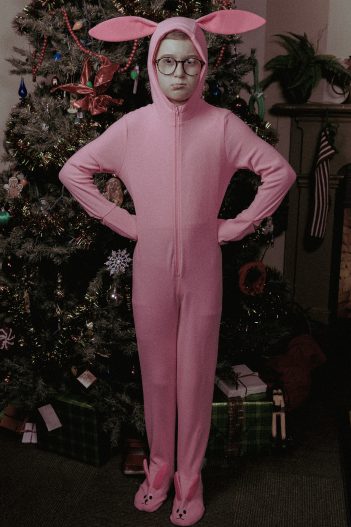 Jackson Duncan puts on the pink bunny suit as Ralphie in “A Christmas Story, The Musical” at Civic Theatre. (Photo courtesy of Civic Theatre)

“I try not to laugh when I walk down the stairs in that suit,” Duncan said of his favorite scene. “I really like the scene where Flick gets stuck to the flagpole. I think that is an iconic scene.”

Duncan said he was somewhat familiar with the movie but had never seen the musical.

“Ralphie is a very funny character,” he said. “He also has the side where he can be serious. He is a character who knows what he wants. He doesn’t wait around for it to come to him, he goes to it.”

Duncan, 13, said he likes the scene where his character puts on the pink bunny suit.

“This is the most fun role I’ve had,” Duncan said. “It’s my first super, super lead role. It’s been fun to work with all the amazing cast and crew mates. Everyone has been super helpful. The adults can be helpful if I’m confused on a term I haven’t heard before or if I don’t understand a part of blocking.” 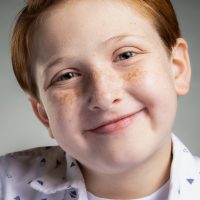 “It’s fun I get to play a bully when I’m not actually a bully,” he said.

Cohen performed in Junior Civic Theatre’s production of “The Little Mermaid” during the summer.

“I’m living my dream to be a Rockette,” she said. “I grew up dancing and singing.”

This is her seventh show with Civic.

“I love doing Christmas shows at Civic. This is my third year,” she said.

“We would stream the movie in our house almost nonstop,” she said of “A Christmas Story.” “We had lines and scenes memorized. They just make me laugh when I think about the movie because it’s such an iconic comedy. It’s a heartwarming story. You see the development of the father and son’s relationship. It’s really touching, along with the comedic aspect of it. It’s attractive to a large range of audience.”

Gaudreau was a figure skater but stopped because of injuries. She has been acting since 2016.

“I have a real sentimental attachment to a group of friends who saw this movie when it came out,” he said. “It hit us at the right age and stuck with us. It’s not typical for me to work on the holiday shows. but I could not pass up the opportunity to see if they could use me for this.”

Carmel resident Emily Rogge Tzucker, who is directing, said she grew up watching the movie that was made in 1983.

“It’s been a big part of my holiday enjoyment,” Tzucker said. “It’s 100 percent true to the movie. It has every single big fun thing in the movie that people that are serious about it would want.”

The music was written by Benji Pasek and Justin Paul, who wrote the music for “Dear Evan Hansen.”