You are at:Home»Current in Geist»Geist Community»Lawrence wins award for Fort Ben initiatives

On Nov. 3, the City of Lawrence was awarded the Accelerate Indiana Municipalities Community Placemaking Award, or AIM, for Operation Fort Ben.

The city was honored during the 46th annual Awards Luncheon presented by Baker Tilly Municipal Advisors during the 2022 Aim Ideas Summit in French Lick. Lawrence won in the greater-than-50,000 population category.

Lawrence Mayor Steve Collier credited the award to organizations in the community that made the redevelopment of Fort Ben possible.

“The city is honored to receive this placemaking award, but of course, it does not happen without the help of many,” Collier said. “Through strong partnerships with the Fort Harrison Reuse Authority, Arts for Lawrence, the Parks and Recreation Board and our entire community, Lawrence continues to be reimagined into a great place to live, work and play.”

“The award event highlighted hundreds of municipal leaders from all over the state,” Hofmann said. “(It) was awarded for the transformation and redevelopment of decommissioned Fort Ben. The Fort was described as ‘vibrant and centrally located.’ All this is thanks to the Fort Ben Reuse Authority.” 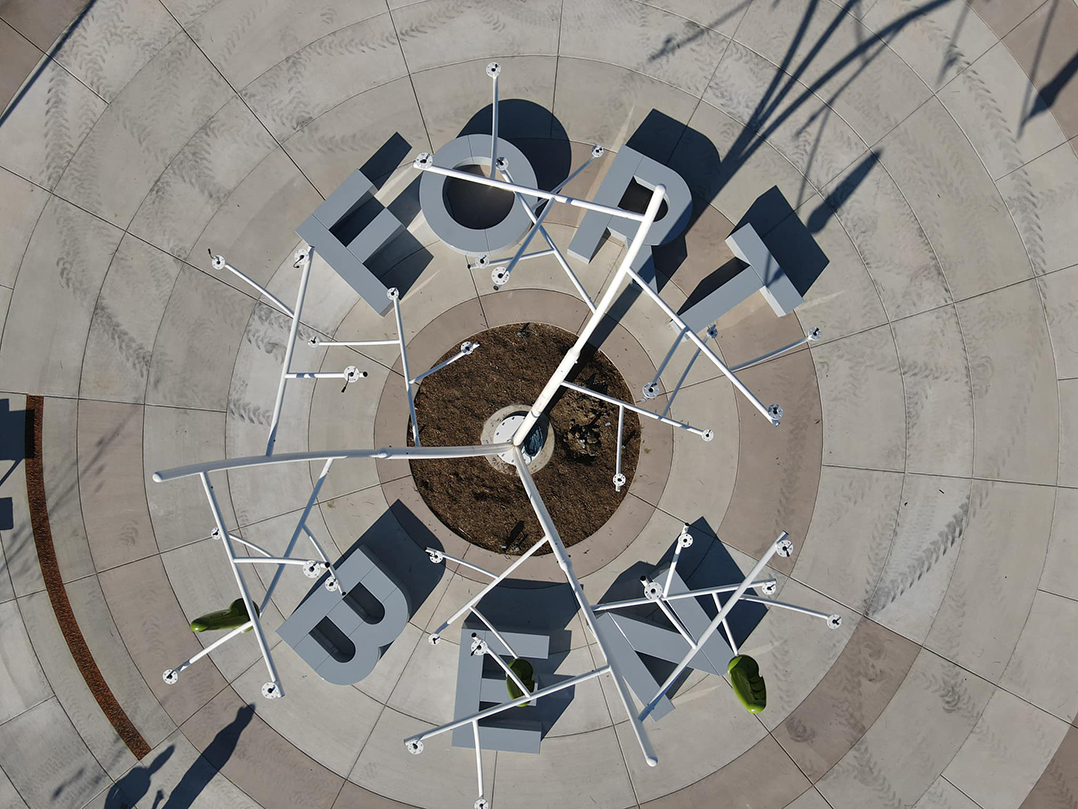 Aerial view of the Fort Ben wind tree in the Civic Plaza. One of three in the country, according to Jeff Vest.

According to the organization, Aim’s mission is to “foster, promote and advocate for the success of Hoosier municipalities as laboratories of innovation, hubs of talent and the engines driving our state’s economy.”

The Aim Annual Awards program recognizes communities and individuals in municipal government for excellence and outstanding achievement. A seven-member panel of judges selected this year’s winners from a field of nominees from across the state. The judges looked at how far Fort Ben has come since being decommissioned.

Fort Benjamin Harrison military base was decommissioned in 1995, and Lawrence “had an opportunity to reimagine the base,” according to Aim. “With the guidance of the Fort Harrison Reuse Authority, the city created a vibrant new downtown and as The Fort has grown, so has the demand for increased access to quality-of-life amenities. The city’s investments in developing features like the Civic Plaza, Fort Ben Cultural Campus, Tour Lawrence bikeshare program, pollinator habitat, new pickleball courts at Lee Road Park and more helped Lawrence take home first place among other community placemaking competitors.”

Aim CEO Matt Greller applauded the city for its efforts.

“It has been exciting to see Lawrence not only pick themselves up by their bootstraps since the base’s decommissioning but thrive into a vibrant community full of amenities and opportunities,” Greller said. “Operation Fort Ben includes the community assets and programs that people mean when they talk about quality of place.”