You are at:Home»Current in Zionsville»A trip to Ephesus is a powerful experience 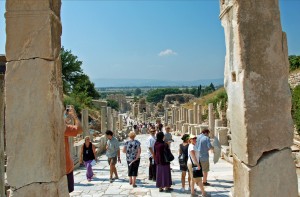 First century Ephesians worshipped the fertility goddess Artemis, whose temple was one of the seven wonders of the ancient world. When the Apostle Paul taught Ephesians that their silver idols of Artemis were not real gods, silversmiths touched off a riot in the 25,000-seat Great Theater, The Great Theater is still largely intact, but the famous temple to Artemis was demolished by a Christian mob in 401.

Early Christians believed that John, the beloved disciple of Jesus, lived and was buried near Ephesus, so Emperor Justinian built a magnificent basilica over the claimed grave site in the sixth century. Jesus’ mother Mary also lived in Ephesus, or so the story goes, because Jesus tasked John with looking after her just before he died on the cross. Visitors to Ephesus climb a steep hill to a brick house where a German seer said Mary lived, many wondering why the house looks so recently built.

In about 450, an influential bishop reported that seven young Christian men had fallen asleep in a cave near Ephesus while avoiding Roman persecution and awoke about 200 years later, amazed that the Empire was now Christian. The Quran reports essentially the same story, the most significant difference being that a dog stayed awake to guard the cave. A grotto near Ephesus honors the Seven Sleepers of Ephesus.

Which of the religious claims for Ephesus are real is largely a matter of belief. But what is undoubtedly real is the powerful experience of visiting a city that has inspired so many beliefs.