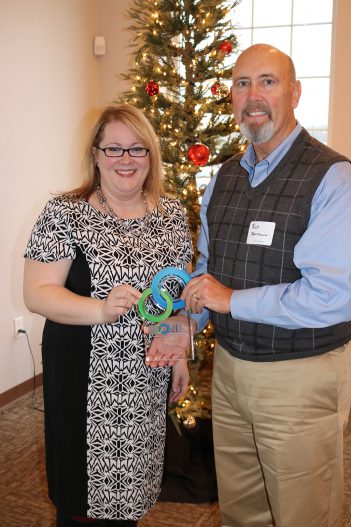 “I was shocked,” said Baldwin, who had to be nudged by his wife to realize he was being honored.

For the past 10 years, Baldwin has used his company’s equipment to spread sawdust in the barn and poured the concrete foundation for the riding arena. He also serves on the Morning Dove board and has been instrumental in helping plan a new building.

He was modest about the honor and his role with the horseback riding facility.

“I believe you don’t get extra credit for doing what you ought to do,” he said.

Boosterville owner Pam Cooper received the award for the Small Business Partner of the Year. The company has created a loyalty program connecting businesses with customers to donate a portion of sales to nonprofit groups.

“I really built this with what I wished had been available when I had my company,” Cooper said.

“We are sensitive to the local mom and pop stores,” she said. “We also know that to be able to spread this technology across the country we need to be able to give these PTAs and other groups somewhere to start.”

Cooper said that by spreading the reach of Boosterville it can bring awareness of small businesses to more people.

“I just always go back to what a great starting point Zionsville has been,” said Cooper, citing the collaborative nature of zWORKS and local merchants in helping create Boosterville.