You are at:Home»Current in Zionsville»Zionsville Cover Stories»On the ballot: Zionsville school board approves two-question referendum

The Zionsville Community Schools Board of Trustees voted unanimously May 13 to approve two referendum questions for the Nov. 5 ballot. The first is an operating levy and the second is a capital bond.

District leaders presented the questions at the January 2019 board meeting as a solution to rising enrollment rates. According to the Indiana Business Research Center’s projections, ZCS will see an increase of 200 or more students each year for the next decade. Many schools in the district will reach, or exceed, capacity by 2023.

The questions are whether to continue the current operating referendum at the same rate that began in 2015, and whether to allow and fund construction of a sixth elementary school, additions to the high school and renovations to the transportation center. 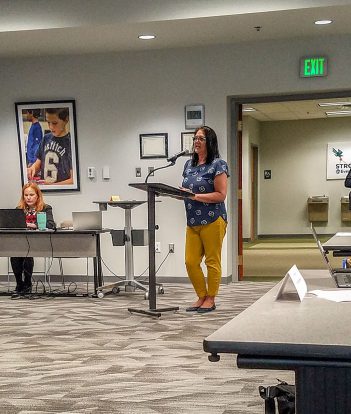 Molly Seward, a Zionsville resident, spoke at the school board public hearing in support of the referendum. (Photo by Desiree Williams)

“I was on the board back in 2010 when we had our first failed referenda and I experienced, as many of you did, the effects of what happened when that failed,” board member Jane Burgess said. “It was probably one of the most painful times that I have ever served on this board, seeing class sizes go up, teachers being let go, programming being cut, and it’s a time I hope we’ll never go back to again.”

“When we put children in classrooms where there’s too many kids, teachers can’t get to know them,” said Molly Seward, a Zionsville resident who spoke at the May 13 public hearing. “When we put kids in situations where even physically there’s not a lot of room, I think it becomes really detrimental to them because no longer are they a person, they’re a number and they become insignificant.”

Other residents echoed Seward’s views and support of the referenda, including Mark Munley, Ann Bender and Mike Karnuta.

“The need for the referendum to be on the Nov. 5 ballot has been clearly shared by others and is backed by data and demographics analysis,” Karnuta said. “The business case is there. The compelling need is there, and the time is now.”

The operating levy will continue the current referendum for a maximum of eight years. It also funds one-third of the district’s teachers and counselors.

The capital bond will fund the expansion project, estimated at $89 million. The board proposes the district-owned 875 campus property as home for the sixth elementary school. It will mirror Union Elementary School’s floor plan. Supt. Scott Robison said a single redistricting effort that coincides with the opening of the elementary school in 2022 could rebalance attendance rates until 2028.

The high school expansion will create a second east-west corridor, add 32 classrooms and allow for a centralized cafeteria and multi-purpose space.

The last portion of the project includes adding parking spaces to the transportation center and reconfiguring Boone Meadow Elementary for more classroom spaces.

“It is critical that we do (one referendum) simultaneously with the other one so that we ensure that we have the monies to do staffing as we grow in the new facilities,” Robison said.

Design will begin immediately, with the elementary school construction scheduled for mid-2020 and the high school additions for 2021, if the referenda are approved Nov. 5.

The referendum questions are:

1. A November 2019 ballot question that, if successful, will serve as an extension of the existing operating referendum capped at the current maximum school tax rate of $0.2444 (read: “24.44 cents”) for an eight (8) year term with proceeds to be used entirely for the funding of an adequate teaching and counseling staff throughout ZCS. (If successful, the 2015 operating referendum would be repealed and the new referendum installed at the exact same tax rate.)

2. A separate (second) November 2019 ballot question to authorize the construction of a new (sixth) elementary school on the CR875 campus, renovations and additions throughout Zionsville Community High School which will provide for approximately 32 additional classrooms and additional common spaces, and other facility projects throughout the district in preparation for additional enrollment (Boone Meadow reconfiguration to add classrooms and new bus parking space at the Transportation Center) all with a maximum tax rate.”

By continuing the operating referendum, the aggregate school tax rate will be $1.268 per $100 of property value, which is slightly lower than the current rate of $1.298.

The capital referendum’s proposed tax rate is 19.69 cents per $100 of property value.

According to Robison, 68 percent of bills for all types of properties will decrease slightly or stay the same and 32 percent will increase. A tax calculator will be available online for residents to determine individual impact.