For nearly 200 years, schools have existed in Noblesville, but it wasn’t until 1869 when the first Noblesville Schools board was established and the district’s first superintendent hired.

Now, 150 years later, district leaders are working to make history of their own by involving the Noblesville community to celebrate the anniversary of the formation of Noblesville Schools. The July 26 Back to School Bash will serve as the official launch of the celebration.

The Anniversary Executive Committee was established at the beginning of 2018 to plan events. It has representatives from the City of Noblesville, Hamilton County, the NHS Alumni Association, Hamilton County Historical Society, Hamilton East Public Library, Nickel Plate Arts, the Noblesville Chamber of Commerce, Noblesville Main Street, Conner Prairie and the Noblesville Schools Education Foundation, along with current and former students and various Noblesville residents.

Perhaps one of the most notable aspects of the district celebrating its 150th anniversary is the creation of Noble Millers, which will consist of 25 individuals who have positively impacted Noblesville Schools through service, support, accomplishments or other contributions.

Noble Millers will be selected by the Anniversary Executive Committee from a pool of nominees submitted by the public. Nominees must be living, cannot be a current student and must be at least 18 years old. Individuals cannot nominate themselves, and nominees are not required to have been students or employees of Noblesville Schools.

“At one time we had the idea of selecting 150 people, but then we thought we really needed to be manageable about what we could actually honor,” said Marnie Cooke, communications director for Noblesville Schools. “Obviously, there are a lot of worthy individuals who are no longer with us, but we think it’s going to be challenging enough to narrow it down to 25 people that are living.”

When the Noble Millers are selected, Cooke said they will be recognized at the annual Miller-Palooza Anniversary Extravaganza Feb. 21, 2020.

There are no restrictions on the number of nominations a person may submit. Nominations will be accepted through Nov. 1 at noblesvilleschools.org/150 or by completing a paper form at the Educational Services Center, 18025 River Rd. 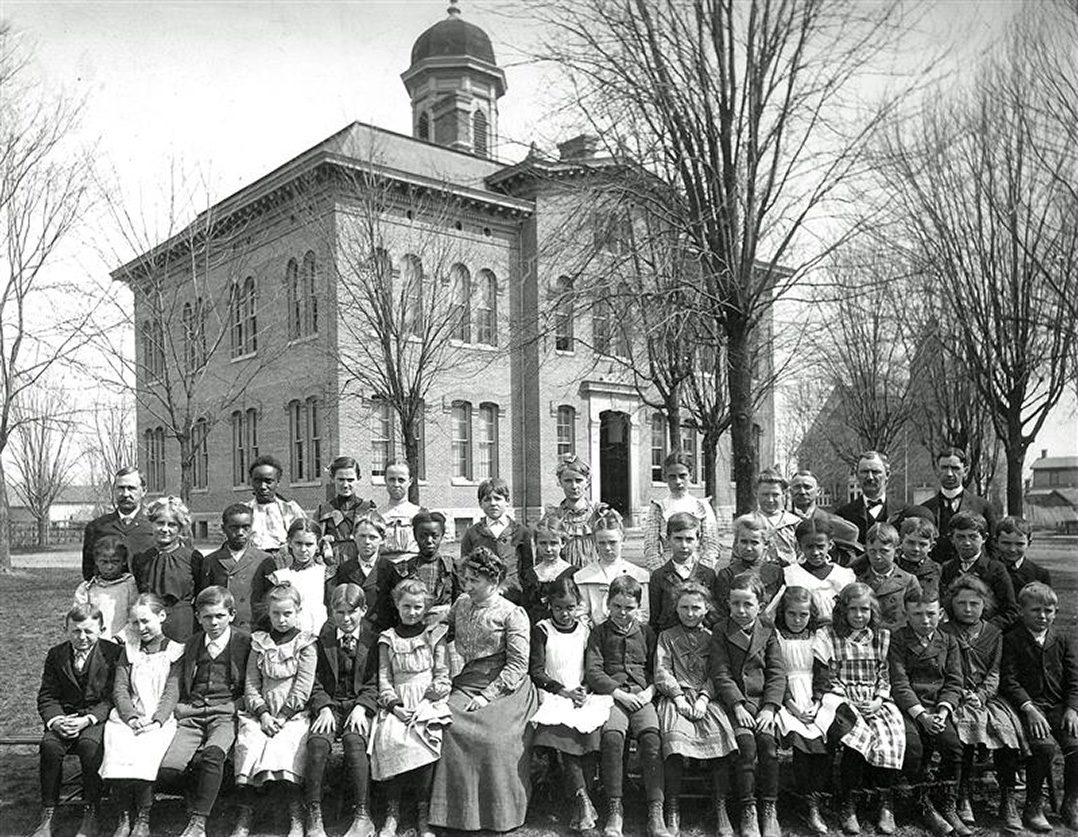 A student body and staff of Second Ward School. The photo is estimated to have been taken sometime after 1890, when schools in Noblesville were no longer segregated. The building was demolished in 1969.

“We want people to donate some artifacts and photos that we can display. For example, any types of clothing items – a band uniform, a varsity jacket, any types of awards, old textbooks, souvenirs like an old program from an event or an old pennant – we’re really looking for all of it,” Cooke said. “Obviously, the much older stuff is so neat, but I think it’s really important that we honor and respect everybody’s school history here, so that also means people that graduated in the 1990s or 2000s, anytime.

“We’re not necessarily going to take all artifacts. People will submit them for consideration and then we’ll go from there to curate displays in the community.”

Artifacts and photos from community members will be shared for the displays and potentially included in a commemorative coffee table book that is being created by a student and the high school’s yearbook director. Artifacts will be returned to the original owners.

RECOGNITON IN THE SCHOOLS

“The district also is going to be pushing curriculum at all grade levels to highlight the anniversary,” Cooke said. “That includes music and art programs, as we have commissioned a custom Noblesville Schools songs that’s going to be played by our bands and sung by our choirs throughout the year.”

Cooke said other projects or areas of focus for students could include researching each school’s roots (mascots, name origin and building location), learning about original and former schools in the city, math projects centered around the number 150 for younger students, language and writing projects ranging from history, important individuals and other facts about Noblesville Schools.

Through June 2020, the 150th anniversary will be ongoing. Dates of note include:

Another event will be a spaghetti supper at the high school in December at an undetermined date. Traditionally, the school offered spaghetti suppers during basketball games. This year’s event will likely be in conjunction with the annual game at which 25- and 50-year basketball teams are recognized.

Cooke said this year’s annual Learning Showcase also will be themed around the anniversary.

“The overall goal of this celebration is that not just Noblesville Schools will be celebrating,” Cooke said. “We want the whole community to celebrate and make this a theme. We really want to encourage people to run with it and get into the school spirit, whatever their organization or business is, to embrace this idea and celebrate all year.”

A TIMELINE OF NOBLESVILLE SCHOOLS