Clay Ross and three fellow members of Ranky Tanky played together as a jazz quartet, The Gradual Lean, at the College of Charleston (S.C.) in the late 1990s.

“I brought the idea to the band to reform and perform Gullah music,” Ross said. “While this culture is familiar to audiences at home in the Lowcountry, I felt that this was something unique and authentic that we could share with the world.” 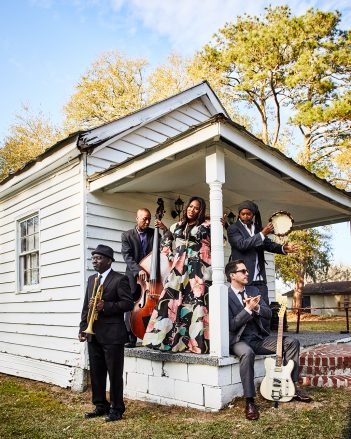 The Lowcountry is the region along the coast of South Carolina and Georgia, including the Sea Islands. The Gullah are African Americans who live in the region. The descendants were brought to the U.S. as slaves and developed their own Creole language, using an English base with elements from various West African languages.

Ranky Tanky will make its first appearance in the Indianapolis area at 8 p.m. Sept. 13 at The Tarkington at the Center for the Performing Arts in Carmel.

Ross, who is white, said they played the Gullah music even in the 1990s. Charlton Singleton, Kevin Hamilton and Quentin Baxter have roots in the Gullah culture.

“Yes, sometimes things would just happen spontaneously,” Ross said. “Charlton and Quentin, our trumpeter and drummer, share a very similar background growing up in Gullah churches in the Lowcountry. They would often burst into spontaneous hymns and reinvent them on the spot in our jazz context. What we are doing now is an extension of that.

“It’s wonderful to share this special music with the world. It has something for everyone and touches people in a deep place in their soul.”

Ranky Tanky loosely means “to get funky” in Gullah. Ross said the jazz influences also are always part of the music.

“This is just a part of who we are as musicians,” he said. “Also, Gullah culture contributed much to the root of all American music. Everything from blues to jazz to folk to gospel owes something to Gullah culture, and you will hear all of that in our sounds.”

The band will play material from its “Good Time” album as well as its debut album, “Ranky Tanky,” released in October 2017.