Cathedral High School junior Ethan Marasco has a swell of civic pride after designing the City of Lawrence’s new flag.

The Lawrence resident is a paid intern in city controller Jason Fenwick’s office, and one of his recent duties was to design a new flag. 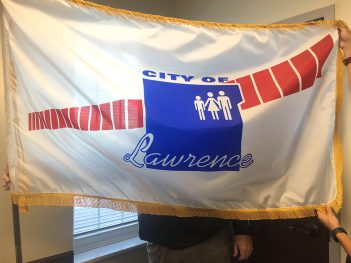 The previous flag for the City of Lawrence

“We were in the office talking about whether we have a flag or not, and it turns out we did but it was really outdated, so (Fenwick) tasked me with creating a new one, and a couple months later, here we are with a new flag,” said Marasco, a graphic design intern. “I started by researching the principles of flag design and different tips and techniques to create good flag design.

“We had these values we wanted to highlight, and we discussed how to highlight those in a design.”

Through his research, Marasco learned a designer can convey meaning through colors and symbolism. He designed the flag using computer programs.

“It was just a really fun process making the flag itself,” he said.

During the design phase, the 17-year-old said his favorite part was learning what worked and what didn’t.

“I brought the mayor (Steve Collier) four designs, and we discussed what he liked about each design and what he wanted,” Marasco said. “We took some aspects from each flag and put those together into what we have now.” 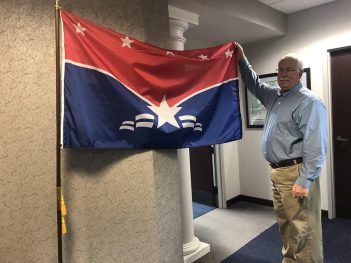 The flag incorporates the colors red, white and blue. Red represents passion and determination. White represents peace and safety. Blue represents unity, diversity and stability. Five stars in the center of the flag represent the five branches of the U.S. military, and white lines in the middle with stripes and a center star depicts a bird flying into the horizon, which symbolizes the city moving forward. The center star is part of Lawrence’s logo.

“I looked at different flags from across the country and the world and noticed things I liked and didn’t like,” Marasco said. “I really liked taking the creative liberty of adjusting what I saw, and I enjoyed looking at other flags.”

Collier is much happier with the new flag.

“The (previous) city flag was never displayed much because it’s not an appealing flag,” Collier said.

In August, the city council unanimously approved the adoption of the new flag.

“They all seemed to really like the new flag, especially when I showed them the previous one,” Marasco said. “(Seeing the flag around the city) really excites me. It’s been a great opportunity, and it feels really good to get all this recognition but also see how much people like it and how happy they are that Lawrence has a new flag and has a new way to show the pride of living in Lawrence. I’ve lived in Lawrence my whole life.”

Marasco plans to major in international marketing in college with a focus in globalization.

Interning with the City of Lawrence

Cathedral High School junior Ethan Marasco began his internship with the City of Lawrence and city controller Jason Fenwick’s office through an internship program for students interested in financial analysis.

He started the internship in April, worked full time during the summer and now works after school and during holiday breaks.

“A lot of the interns over the summer were majoring in things like economics or finance, but I went into it doing more of graphic design aspect,” Marasco said. “I’ve really gotten to hone my skills with graphic design using Photoshop, Illustrator and InDesign, and I got to express my creative side through making things like budget reports and fliers.”