You are at:Home»Current in Zionsville»Zionsville Cover Stories»‘Ultimate professional’: Zionsville chief of police to retire

For several years, Zionsville Police Dept. Chief Robert Knox has gone on “Andy Griffith” walks. On a pleasant day, he’ll stroll down the town’s brick road and talk to the merchants on Main Street for an hour or two, asking questions, gaining insight, inquiring if there is anything he can do to better serve the town.

Some days, brings newly sworn-in officers, too, so residents can meet them.

As a result, his face is well-recognized in the community. But after more than 40 years, nearly all of which were spent serving the town, Knox, 62, has announced he plans to retire.

He and his wife, Karin, discussed the decision for more than a year.

“It felt like it was time,” Knox said. “I’ve had a wonderful career and have been very blessed with a lot of opportunities and absolutely amazing people to work with, work for, learn from.”

Knox’s last day with the department will be April 6. His successor has not been named. Knox plans to speak at the Zionsville Town Council’s April 6 meeting, his final chance to address the community in a public setting.

When Knox began working for the department as a reserve officer, it had only five officers in what he described as quaint town “a Boone County country boy.” The town has since grown, and so, too has the police department, which now has 38 sworn officers.

During his tenure, Knox has seen many changes in the department and in policing more broadly. He said he takes pride in the department’s community outreach and in its citizens’ academy, teen academy and drug take-back program. He praised its ability to take drugs and unwanted pharmaceuticals off the street and for equipping officers with the best equipment. He also lauded the dedication of the men and women at ZPD and the partnerships it has forged with other departments in town, in the county and across the state and the U.S.

“It’s really a group that works well together,” Knox said.

Thrust into a leadership position eight years ago when he was appointed chief, Knox was asked to do many things. One of them has been to guide and mentor the next generation of ZPD officers.

“What keeps me up at night is worrying about these men and women,” Knox said. “It’s been an opportunity of a lifetime, the best job I’ve ever had, but also the most stress I’ve ever had. It really is a roller coaster. There’s never been two days that have been exactly the same.”

Although there have been dark days and memories that will be difficult to forget, Knox said there is no other career he could have done. He said the field almost draws people to it, attracting only those with the specific personality suited for the job.

“(It’s takes a) certain type to go out there and put yourself in harm’s way for somebody you’ve never met,” Knox said. “But you’d have to ask Freud what that personality would be.”

ZPD Capt. Bob Musgrave said Knox has always been an “ultimate professional.” The two worked together before Knox was first hired by ZPD, when Knox was a reserve officer at the Lebanon and Whitestown police departments. When Knox was hired by ZPD as a full-time officer, joining Musgrave, the two began a friendship that has lasted more than four decades. When Musgrave had to take six weeks off for an illness last year, Knox called him every day and stopped by to see him in the hospital three times the day of his surgery.

Knox makes personal calls to officers in the department every day and checks in with them when stressful events occur, Musgrave said.

“I told him the other day, ‘You’re going to keep a uniform at home, aren’t you? Just so you can wear it every day,’” Musgrave said. “It’s been a pleasure to have him for our police chief, and not for just us, but for the community. Whoever sits in that chair next is going to have some big shoes to fill.”

Although he’ll no longer  be in uniform, Musgrave said he won’t be surprised to see Knox making his “Andy Griffith” walks down Main Street long after April 6. 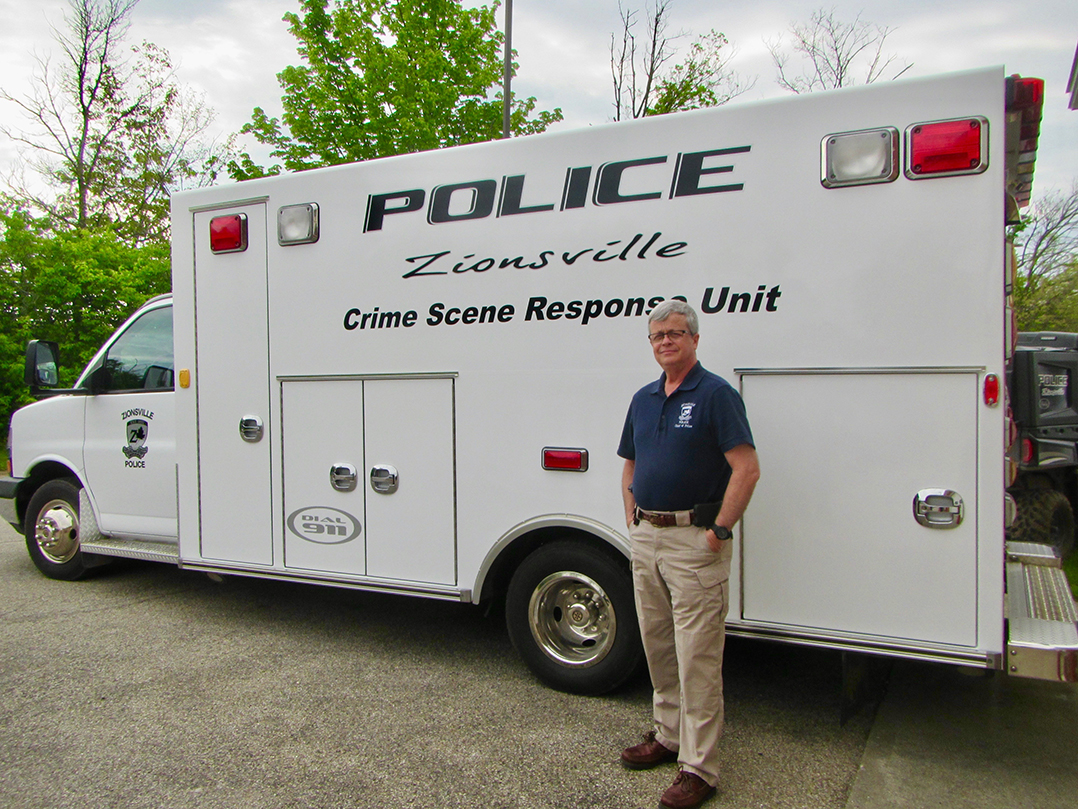 Runs in the family

He grew up in Advance, a small town in Boone County, and had little desire to venture far from home. His father, Darrell Knox, was a military police officer. Years later, Robert Knox took after his father, becoming a police officer, and now Robert’s son, Justin, has taken after him, becoming a sergeant at the Lebanon Police Dept.

“My wife, Karin, and I are so proud of him,” Knox said. “But I now realize what I put my parents through. But he’s a sharp kid, and I’m proud of him.”