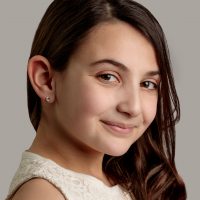 Originally conceived as a one-hour, staged children’s musical, Cohen and 25 other Broadway Artists Alliance of New York City students will be part of the first educational production of this new online version of “Dear Edwina,” and will be the featured singers on the official learning tracks sent to all future companies that put on this version of the show. Cohen and her cast mates, ages 8-14, have just completed filming and are looking forward to the live streaming events of the fully edited production.

The show is double cast. The SUN cast is when Cohen performs as Aphrodite and has a featured solo, her mother Melissa Cohen said. This show is 3 p.m. Jan. 23 and 7 p.m. Jan. 24. She appears as a Napkin Sister in the Trio in the STAR cast at 7 p.m. Jan. 23 and 3 p.m. Jan 24. Cohen appears in all of the ensemble scenes exactly the same in all four shows.

“So, depending on when someone is available to view, they will see Sadie regardless,” Melissa said.

“Dear Edwina Online Edition’s” nature as a musical meant for the era of quarantine poses unique challenges, including the fact that all rehearsals, filming, and editing take place completely remotely. Cohen and her cast mates, who hail all over the United States, have gathered together on Zoom for read-throughs, music and blocking rehearsals, character study and meetings to discuss individual “shot lists” and recording requirements. Cohen has appeared including the Indiana Repertory Theatre, Beef & Boards Dinner Theatre, Booth Tarkington Civic Theatre and Actors Theatre of Indiana.