You are at:Home»Current in Zionsville»Zionsville Cover Stories»Love in recovery: Area couple meets in an unexpected way 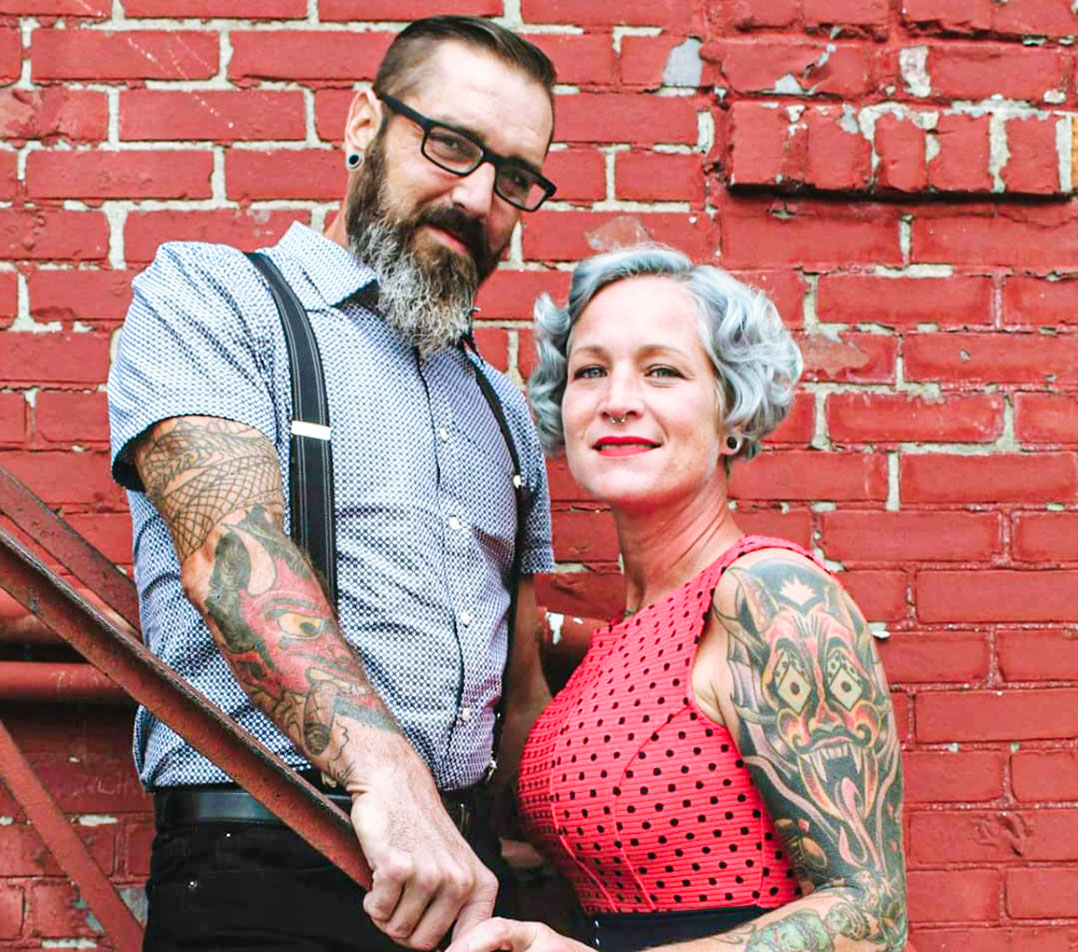 John and Keree McIntyre met in an addiction recovery meeting and have since married and started a business.

Keree would stare at John from the other end of a church in Lebanon during an addiction recovery meeting. She thought he was cute. During a later meeting, she noticed he got a new tattoo, giving her an excuse to finally talk to him.

Their love story bloomed from that conversation 1 1/2 years ago.

John and Keree McIntyre, both 44, have since married and started a construction business, aiming to offer others in recovery a second chance.

“(I) had a typical two-parent home upbringing for the early stages of my youth,” John said. “Everything was normal – made great grades, three-sport athlete, tons of friends, life-of-the-party-type of kid.”

John, a Thorntown native, later married and had a daughter. He projected the image of a husband and father for several years, all the while hiding his addiction, compulsively lying, spending money the family didn’t have, infidelity. He became addicted to more substances. After he was arrested and incarcerated several times, he knew he needed help, so he went to a rehab facility.

John checked into Progress House in Indianapolis and got sober four years ago. Although he continued to attend his narcotics and Alcoholics Anonymous meetings and went back to work, his ex-wife had had enough. John found himself single, working 16-plus hours a day.

Keree, a Florida native, grew up in a dysfunctional family. When she was 12, she said a neighbor raped her.

“By the time I was 13, I was using acid and about anything else I could find from friends or people,” Keree said. “That was most of my young adult years.”

Keree was sober for two years, married and had two sons. Her marriage ended shortly after her second son was born, and she relapsed.

“About 20 years of my life was on drugs or drinking, homeless, just bouncing around,” Keree said. “Sometimes I would get my head together, but I was still using. I tried to get help, but I wasn’t ready. I tried six times to get my sobriety.”

In 2017, Keree said she “went off the deep end.” She was in Florida, homeless and spending most of her time with other people struggling with addiction. Facing charges of possession and paraphernalia, she fled north and was apprehended following a high-speed chase in Whitestown.

“By the grace of God, it was really what I needed,” said Keree, who has been sober for two years.

Keree lived in a halfway home in Crawfordsville and later a recovery home for women in Lebanon.

Since meeting, John and Keree have supported each other’s sobriety journey.

“I make sure whenever I have a thought or issue, whether it’s substance related or anything that could make me emotional to where I would want to use, I have a partner who I can talk to about anything,” Keree said. “I know I can say anything without judgment.”

Residents of Kirklin in Clinton County, which is just north of Boone County, they now take their battle with addiction one day at a time, Keree said.

“I wouldn’t say we worry about it, definitely, but it is always there, and it probably always will be there,” John said. “But if you are open and honest about things and you work on it in a small way every day, the chances (of relapse) are fewer and fewer every day.”

John and Keree now help others in their journey to sobriety by staying active in the recovery community. By doing so, they say it continues to remind them of all they’ve gained while helping others.

“I worked summer jobs doing landscaping, so we decided to start our own little side business doing some landscaping things, and it quickly went from a very small operation to now we are busy six days a week with clientele we never thought we would be helping,” John said.

John and Keree soon found they needed employees, so they reached out to people in recovery, with felonies and other transgressions that might limit their employment options. The company now has six employees. They hope the company can help others in recovery by offering them not only employment but also a supportive environment that encourages them to believe they “aren’t their past.”

“Recovery is possible,” John said. “I would tell other people, ‘Don’t be ashamed or afraid or embarrassed to ask for help. That doesn’t show a sign of weakness. It can be done. There are others just like us who do it every day.’”