You are at:Home»Current in Noblesville»Noblesville Community»Noblesville council president urges Westfield council to continue with Ind. 32 expansion

Although the Westfield City Council removed the Ind. 32 agreement item off the agenda for its April 26 meeting, several Noblesville Common Council members attended the Westfield council to continue with the previously approved plans for expanding Ind. 32. 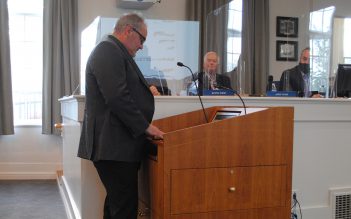 For the past month, some members of the Westfield City Council have considered terminating the agreement between the city and the Indiana Dept. of Transportation. The agreement was made in 2018 and outlined a partnership between the two entities for an expansion to Ind. 32 through Westfield’s downtown. Because the Westfield council announced it was considering terminating the agreement, Westfield Mayor Andy Cook said INDOT would not pursue improvements to the highway between Noblesville and Westfield if the expansion doesn’t happen. Some council members took Cook’s assertion as a threat to manipulate their decisions. Noblesville Common Council President Darren Peterson addressed the situation during the public comment session of the Westfield council meeting.

“We are here tonight to encourage the Westfield council to reconsider their ordinance to cancel the State Road 32 project in Westfield. As members of the Noblesville council, we understand the importance and duty of making good fiscal decisions for a growing city in Hamilton County,” Peterson said. “We are often faced with decisions that must balance existing constraints, growth and financial responsibility. With approximately 19,000 vehicles driving this two-lane roadway each day, there is no question that State Road 32 through Hamilton County is in dire need of capacity improvement.”

Westfield City Council President Mike Johns said the council decided to remove the item from the April 26 agenda because he felt there wasn’t enough information to make a decision. Johns said he and two other Westfield councilors had a Zoom meeting with INDOT officials prior to the council meeting. After the meeting, Johns said he requested more information regarding the project’s design, and INDOT will present that information during a public meeting from 6 to 8 p.m. May 4 at the Grand Park Events Center, 19000 Grand Park Blvd, Westfield.

“Westfield has a great opportunity for a 50/50 partnership with INDOT on this project,” Peterson said. “Most importantly, cost and risk will be shared, including cost overruns if bids come in higher than anticipated.”

Previously, it was agreed that Westfield would cover any cost overruns, but INDOT recently announced it would split the overruns with the city.

“This partnership allows the city to incorporate design features which INDOT would not otherwise consider, including constructing a roundabout at East Street, widening the

sidewalks, burying utilities and adding aesthetic features along the corridor,” Peterson said. “Currently, Noblesville is making a significant investment to fix the same capacity problem in our own downtown. We understand the regional significance of State Road 32, not only to our city, but across central Indiana connecting I-65 to I-69. INDOT has publicly stated that they have

funded a $35 million project to add travel lanes from East Street in Westfield to River Road in Noblesville. This would connect to both Noblesville’s and Westfield’s committed downtown projects.

“Westfield cancelling their downtown project would result in INDOT reevaluating their

investment and possibly canceling any further investment along State Road 32 in Hamilton County. This would have a detrimental effect beyond Westfield’s borders, into Noblesville and throughout the county and state.”

Peterson asked council members to reconsider the proposed ordinance to terminate the agreement between Westfield and INDOT. Because Peterson spoke during the public comment session, the Westfield City Council did not respond.