You are at:Home»Current in Geist»Geist Cover Stories»Putting cancer in their wake: Indy SurviveOars forge bond, strength through paddling dragon boats

“Paddling a dragon boat is hard and everyone sucks the first time they go out.”

That’s the message that Indy SurviveOars coach Sarah Demmon tells rookies when they first sign up for the team. They’ll giggle or smile at the bluntness from Demmon, a Fishers resident, but the women seeking to be a part of the SurviveOars club know that piloting dragon boats may be a struggle, but it’s nothing like battling breast cancer.

For 14, years the SurviveOars have been paddling Geist Reservoir, building a sorority of Indianapolis-area breast cancer survivors along the way. The women, who range from their 30s to age 75, have participate in races throughout North America, although COVID-19 has left them without competition for more than a year.

The club was set to compete in Kentucky on Sept. 11, but that, too, was canceled because of rising COVID-19 cases in the area. A replacement event against their sister team from Illinois is tentatively scheduled for Sept. 11 on Geist, but the club is unsure if it will happen.

For the SurviveOars, whether or not they compete against another team is secondary to a larger objective.

“The most important thing to me is their physical fitness because it speaks to their survivorship and lessens the chance for (cancer) reoccurrence,” Demmon said.

The team trains three days a week. Even in the offseason, after October when they are not allowed to be in the water, club members get together to work out.

Demmon has been a member of the SurviveOars since its first season in 2007, right after she had recovered from breast cancer. She was a paddler at the time before becoming a captain three years later. She became a coach not long after that. When she first joined the club, it was a natural fit because she had been a multi-sport athlete her entire life and saw a connection between competing on a team and improving the health of breast cancer survivors.

“I tell them, ‘You are now athletes.’ I look at them as athletes, I don’t look at them as cancer survivors,” Demmon said. “It’s the catharsis of, ‘Screw what just happened to me, I’m going to go out and do this for me and my survivorship.’ It’s about taking a bad hand and turning it into a positive and helping your body recover. What better way to do that than through an athletic activity and sports to help the scar tissue and keep your lymph system flowing? To me, to face what you’ve faced and come out the other side and do this is the best.

“To see the look on my rookies’ faces after their first race and after they get off the water, and the smile on their face, it’s the culmination of everything that happens to them. They realize that they can do this.”

It’s a sense of accomplishment many of the SurviveOars have felt. Most have competed against and beat cancer before competing as a paddler, which is different from a rower. Paddling targets the shoulders and pectoral muscles, while rowing focuses on the core. The SurviveOars exclusively paddle, which a Canadian doctor — Don Mackenzie, who brought dragon boating to the North American from China in the 1990s — believed the motion of paddling would be beneficial for breast cancer survivors.

In some cases, the fight against cancer for a team member is ongoing.

“Some of our girls are still in treatment,” Indy SurviveOars Board President Elizabeth Anderson said. “No one wants to hear the word ‘cancer.’ It’s scary. But having this group, they inspire you no matter if you are in treatment or you are 10 years out, you’re still inspired to keep moving forward. You can have an active life even with the cancer.”

Anderson, a Noblesville resident, has been part of Indy SurviveOars for nine seasons, beginning after she recovered from breast cancer. She had a relapse five years ago, and in that moment, she leaned on the sisterhood of the SurviveOars.

“The best silver lining was that I was a member of this team during my second diagnosis,” Anderson said. “While I did have a strong support group of my friends and family, being with these 70 women that are all survivors, it was just amazing. I wasn’t able to just be physically active, but I was able to manage my treatment better. It really helped being with these strong women.”

In previous years, the SurviveOars would have supporting team members, like Kristi Dickson of Fishers, who had not had breast cancer but who would join the team for races to fill out a boat. Dickson joined in 2013, but then in 2019 she was diagnosed with breast cancer and became a SurviveOar.

“I started my treatment just before COVID started, so when I was on medical leave and things were starting up with COVID, it was just nice to have team members know that I was out and that I had had surgery and they reached out to me,” Dickson said. “I had the whole support group in place before I went through treatment.”

Dickson leaned on her teammates for treatment suggestions, which they were happy to supply. It tapped into the essence of what the Indy SurviveOars can be: A support group built one paddle at a time. 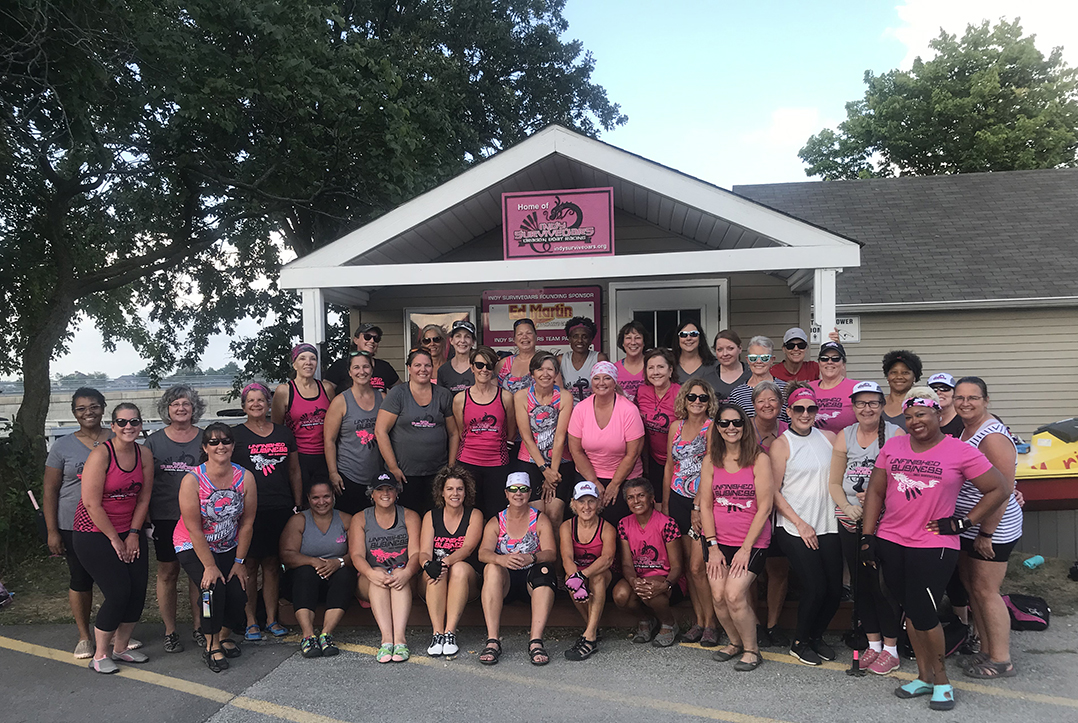 Nearly 40 of the 70 members of the Indy SurviveOars gather at their shack on Geist Reservoir in preparation for a practice.

The annual fundraiser for the Indy SurviveOars is their Pink Paddle Party, which will be a virtual event conducted Nov. 13.

“It’ll be our first time doing anything like this (virtually), so whatever we are able to pull off we’ll be excited about it,” Indy SurviveOars Board President Elizabeth Anderson said.

The event raises funds for travel to races, equipment and boats. For more or for sponsorship opportunities, visit indysurviveoars.org.