As part of Conner Prairie’s “Curious Conversations” series for Native American History month, the living history museum in Fishers presented an online webinar Nov. 10 about the rich culture of the Native American Lenape, or Delaware, people.

Curator of Native American History & Life at Conner Prairie Sara Schumacher hosted a webinar entitled “Learning Through Objects in Lenape Culture Confirmation.” The webinar focused on the tradition and culture found within the clothing and objects of the Lenape people. Three citizens of the Delaware Tribe of Indiana spoke on the topic, including Mike Pace, who works at the Conner Prairie Lenape Indian Camp as a cultural liaison between his tribe and visitors.

“Each tribe developed in different areas of the country,” Pace said. “The resources were quite different. We had to learn to adapt to where we are, where we were forced to move. The things used for traditional art are based on the tribe’s environment. Each tribe has their own way of expressing that.”

Pace is a member of the Delaware tribe and is the great-grandson of Charles Elkhair, the last hereditary ceremonial chief of the Oklahoma Delaware. He is knowledgeable about many topics, including how to throw a tomahawk, the intricacies of beadwork and Delaware interactions with fur traders.

“Earlier clothing was based on buckskin, and later, cloth with the fur trade on the East Coast,” Pace said. “For instance, with beadwork, everything was handmade and done one bead at a time. The glass beads later came from Europe in trading, which brought about more colors to work with. Cloth from the trade was also used as a recreation of ribbon work. The styles were indicative of specific tribes, and even (are) still today.”

Schumacher said traditional clothing evolved to blend with the Europeans’ style, which meant that modesty became the focus of Native Americans’ wardrobe. Different tops became more popular as they lived among the Europeans in the area.

Annette Ketchum, a Delaware citizen whose husband was chief of the tribe from 1998 to 2002, shared her knowledge about women’s traditional clothing.

“Clothes back then really have not survived, especially skirts,” Ketuhum said. “But they have evolved based on the recreation materials available today. I think, probably, our ancestors used shells and dried seeds to make beads for beadwork necklaces. Today, not so much.”

Beadwork was an important aspect of Native American culture. In many cases, the intricate form of embroidery was a way to communicate when language fell short.

“When we were using the wampum beads (beads made from various white and purple mollusk shells), Northeastern tribes had different symbols that they would wear on their clothes to differentiate themselves,” Pace said. “The Delaware usually had large white belts, worn diagonally across your shoulder to your waist. The tribes did not have anyone who spoke English or French, so they used wampum belts to draw pictures of treaties with the Europeans so everyone could understand.”

Pace said that a 6-foot belt required between 6,000 to 7,000 beads, each made by hand. Eventually, the beads became a form of currency.

“The Lenape tribe used red and black beads as tribal colors,” Pace said. “Those colors mean life and death (respectively). When it came to design, diagonal diamond shapes were seen in the Miami tribes. The Delaware used two-color designs like red and yellow or white and black in order to make the designs standout.”

Ketchum said the way certain clothing items were made and adorned further represented the location of tribes.

“The moccasins I’m wearing are soft-soled,” she said. “You can always tell a woodland tribe by the soft soles.”

Woodland tribes wore soft-soled moccasins to protect their feet from the ground, brush and rocks while also keeping their feet warm and dry.

Pace said traditional tribal clothing and objects are a form of art that connects community and culture.

“Art is something so important, but to be able to retain the art of your tribe is of greater importance,” Pace said. “The art is shared through saving and reproducing artifacts. The artifacts need to be passed down, either orally or physically. And as elders, it’s our privilege to pass on the skills we possess.” 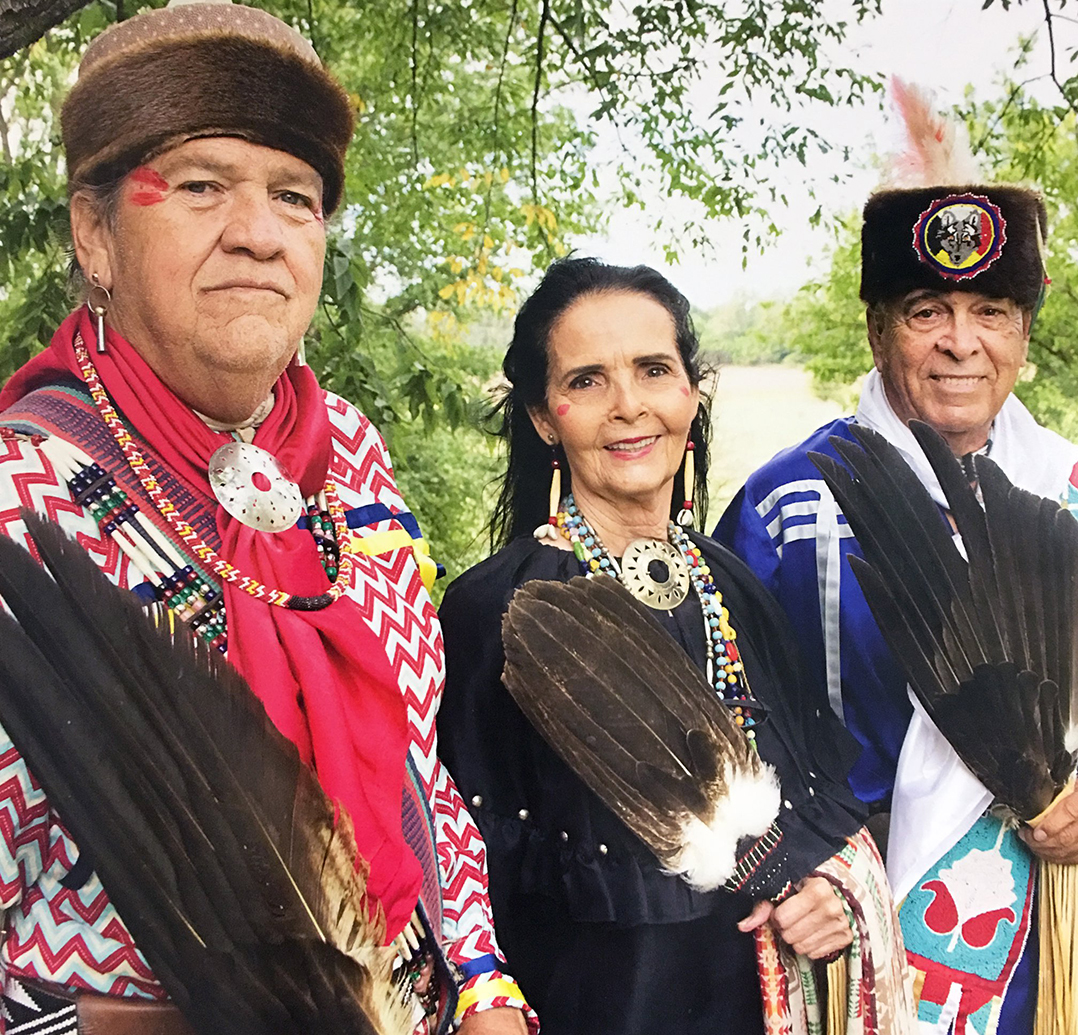 Michael Pace ,left, great-great-great-grandson of Chief William Anderson (Kikthawenund) and artist-in-residence at Conner Prairie, with Delawares (Lenapes) Annette Ketchum and her husband Dee Ketchum of Bartlesville, Okla., in a recent issue of The Hoosier Genealogist. Image courtesy of Conner Prairie.

According to the National Congress of American Indians, November is a time to celebrate rich and diverse cultures, traditions and histories and to acknowledge the important contributions of Native people. Here is a list of some of the tribes that called Indiana home.